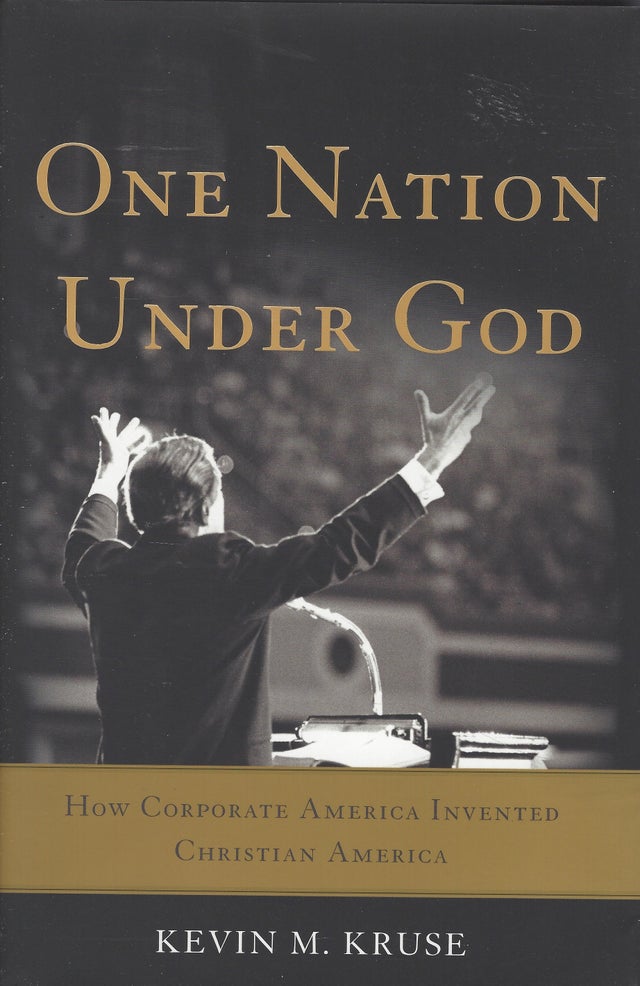 We are often told that the United States is, was, and always has been a Christian nation. But in One Nation Under God, historian Kevin M. Kruse reveals that the idea of "Christian America" is an invention -- and a relatively recent one at that.

As Kruse argues, the belief that America is fundamentally and formally a Christian nation originated in the 1930s when businessmen enlisted religious activists in their fight against FDR's New Deal. Corporations from General Motors to Hilton Hotels bankrolled conservative clergymen, encouraging them to attack the New Deal as a program of "pagan statism" that perverted the central principle of Christianity: the sanctity and salvation of the individual. Their campaign for "freedom under God" culminated in the election of their close ally Dwight Eisenhower in 1952.

But this apparent triumph had an ironic twist. In Eisenhower's hands, a religious movement born in opposition to the government was transformed into one that fused faith and the federal government as never before. During the 1950s, Eisenhower revolutionized the role of religion in American political culture, inventing new traditions from inaugural prayers to the National Prayer Breakfast. Meanwhile, Congress added the phrase "under God" to the Pledge of Allegiance and made "In God We Trust" the country's first official motto. With private groups joining in, church membership soared to an all-time high of 69 percent of Americans.

During this moment, virtually all Americans -- across the religious and political spectrum -- believed that their country was "one nation under God." But as Americans moved from broad generalities to the details of issues such as school prayer, cracks began to appear. Religious leaders rejected this "lowest common denomination" public religion, leaving conservative political activists to champion it alone. In Richard Nixon's hands, a politics that conflated piety and patriotism became the sole property of the right.

Provocative and authoritative, One Nation Under God reveals how the unholy alliance of money, religion, and politics created a false origin story that continues to define and divide American politics to this day.