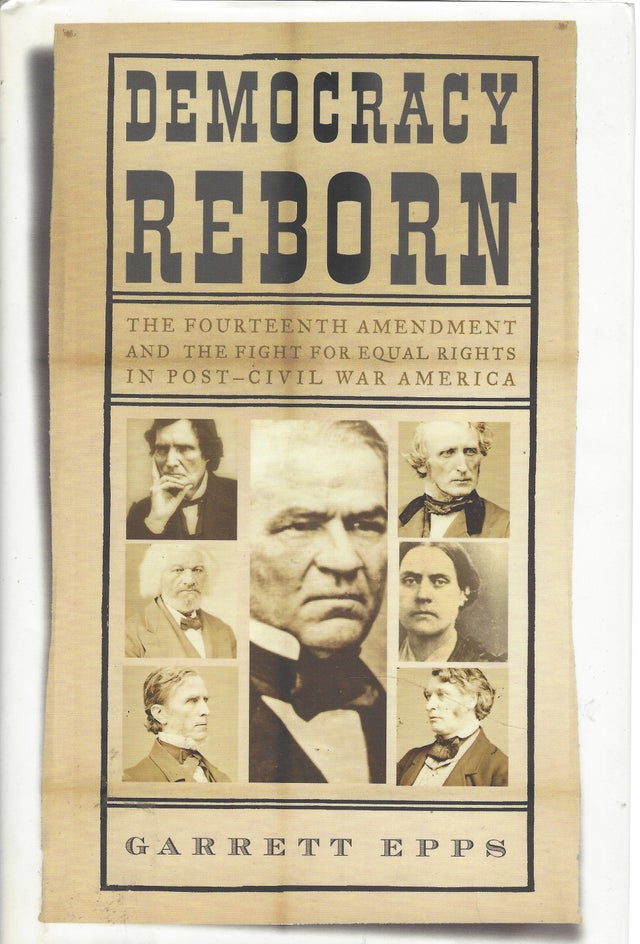 Democracy Reborn: The Fourteenth Amendment and the Fight for Equal Rights in Post-Civil War America by Garrett Epps

Democracy Reborn: The Fourteenth Amendment and the Fight for Equal Rights in Post-Civil War America by Garrett Epps

The last battle of the Civil War wasn't fought at Appomattox, but in the Pacific Railroad Committee Room of the U.S. Capitol, in the Cabinet Room of the White House, and in the hotels and gambling dens of Washington, D.C. It was fought not by dashing generals or young soldiers but by middle-aged men in frock coats. Yet it was war all the same -- a desperate struggle for the soul and future of the new American Republic that was rising from the ashes of the Civil War. It was the battle that planted the seeds of democracy, under the bland heading "Amendment XIV." Scholars call it the "second Constitution." Over time, the Fourteenth Amendment -- which at last provided African Americans with full citizenship and prohibited any state from denying any citizen due process and equal protection under the law -- changed almost every detail of our public life.

Democracy Reborn tells the story of this desperate struggle, from the halls of Congress to the bloody streets of Memphis and New Orleans. By stealth, calculation, and compromise a small group of antislavery political leaders outmaneuvered Lincoln's successor, who was determined to keep America a white republic; won the nation to their side; and enshrined the idea of equality into America's Constitution for the first time. Americans today live in the house they redesigned.

One-sided compromises with slavery had weakened the Constitution in 1787, rewarding the white South with disproportionate power. In 1865, the South's armies were humbled, but its politicians were prepared -- with President Andrew Johnson's support -- to reenter Congress and run the nation as they had before Fort Sumter. In opposition, congressional leaders knew they had only a few weeks to seat a new Congress and begin the process of constitutional reform. Led by Charles Sumner, Thaddeus Stevens, and Robert Dale Owen, their high-stakes political game took place against a backdrop of mob violence, threats of a coup d'etat, and an angry southern president who considered the reformers traitors. Each choice the reformers made would shape the new nation for decades, even centuries to come.

Both a novelist and a constitutional scholar, Garrett Epps unfolds a powerful story against a panoramic portrait of America on the verge of a new era. Included in that portrait are Walt Whitman, feminists Elizabeth Cady Stanton and Susan B. Anthony, black abolitionist Frederick Douglass, and dozens of others, famous and unknown, who took part in the battle that reshaped our democracy. No reader who hopes to understand American history can ignore the constitutional revolution that produced the Fourteenth Amendment.