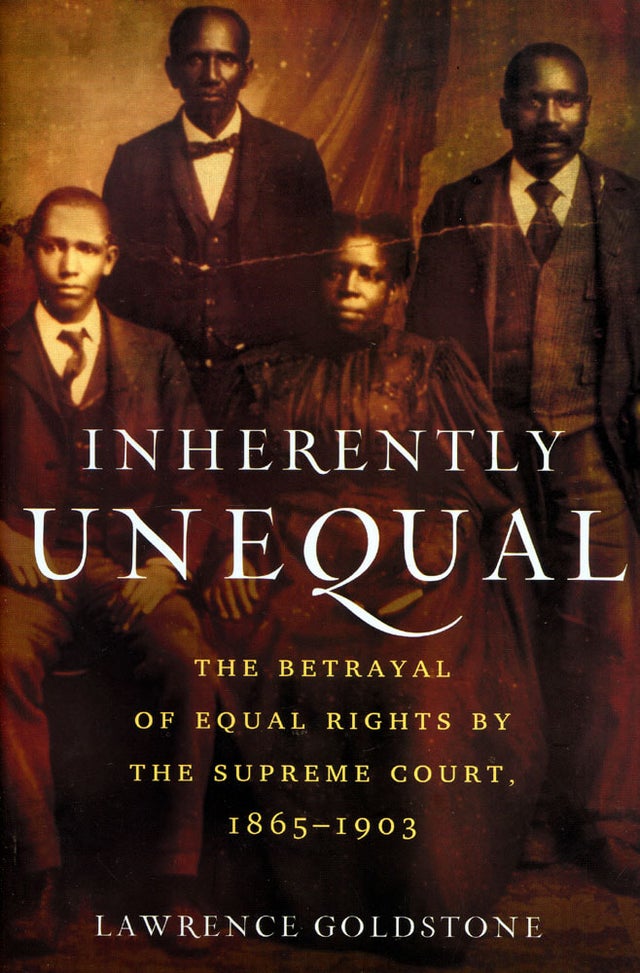 Inherently Unequal: The Betrayal of Equal Rights by the Supreme Court, 1865 - 1903 by Lawrence Goldstone

Inherently Unequal: The Betrayal of Equal Rights by the Supreme Court, 1865 - 1903 by Lawrence Goldstone

In the years following the Civil War, a series of extraordinary laws remade America's social landscape. The Thirteenth Amendment abolished slavery; the Fourteenth conferred citizenship and equal protection under the law to all Americans, white or black; and the Fifteenth gave black American males the right to vote. In 1865, the most comprehensive civil rights legislation in the nation's history granted all Americans, regardless of color, "the full and equal enjoyment" of public accommodations, conveyances, and places of amusement. Yet just eight years later, the Supreme Court, by an 8-1 vote overturned the Civil Rights Act as unconstitutional and, in a series of subsequent rulings, disemboweled the equal protection provisions of the Fourteenth Amendment.

Using court records and accounts of the period, Lawrence Goldstone chronicles how "by the dawn of the twentieth century the United States had become the nation of Jim Crow laws, quasi slavery, and precisely the same two-tiered system of justice that had existed in the slave era." The very human story of how and why this happened -- and the continued impact of the Court's record today -- make Inherently Unequal as important as it is provocative.

Examining both celebrated decisions such as Plessy v. Ferguson and some equally significant but often overlooked cases such as Williams v. Mississippi, Goldstone demonstrates how the Supreme Court turned a blind eye to the obvious reality of racism, defending instead the business establishment and status quo -- thereby legalizing the brutal prejudice that came to define the Jim Crow era. By justifying their decisions as a defense of the Constitution, successive Courts perpetuated the hypocrisy of strict construction. Goldstone presents clear evidence that the great black migrations north were begun to escape tyranny as much as to seek economic opportunity. At this pivotal moment in our history, when the politics of race and the judiciary are constantly at issue, Inherently Unequal transforms our perspective on a period vital to understanding the Supreme Court today.