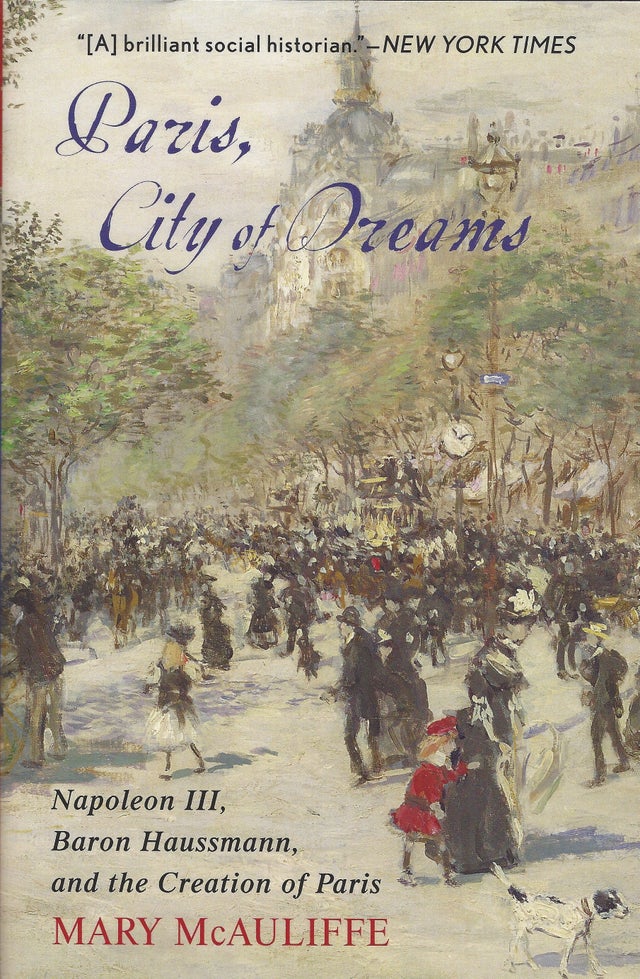 Paris, City of Dreams: Napoleon III, Baron Haussmann, and the Creation of Paris by Mary McAuliffe

Paris, City of Dreams: Napoleon III, Baron Haussmann, and the Creation of Paris by Mary McAuliffe

Paris, City of Dreams traces the transformation of the City of Light during Napoleon III's Second Empire into the beloved city of today. Together, Napoleon III and his right-hand man, Georges Haussmann, completely rebuilt Paris in less than two decades -- a breathtaking achievement made possible not only by the emperor's vision and Haussmann's determination but by the regime's unrelenting authoritarianism, augmented by the booming economy that Napoleon fostered.

Yet a number of Parisians refused to comply with the restrictions that censorship and entrenched institutional taste imposed. Mary McAuliffe follows the lives of artists such as Edouard Manet, Berthe Morison, and Claude Money, as well as writers such as Emile Zola, Gustave Flaubert, and the poet Charles Baudelaire, while from exile, Victor Hugo continued to fire literary broadsides at the emperor he detested.

McAuliffe brings to life a pivotal era encompassing not only the physical restructuring of Paris but also the innovative forms of banking and money-lending that financed industrialization as well as the city's transformation. This in turn created new wealth and lavish excess, even while producing extreme poverty. More deeply, change was occurring in the way people looked at and understood the world around them, given the new ease of transportation and communication, the popularization of photography, and the emergence of what would soon be known as impressionism in art and Naturalism and Realism in literature -- artistic yearnings that would flower in the Belle Epoque.

Napoleon III, whose reign abruptly ended after he led France into a devastating war against Germany has been forgotten. But the Paris that he created has endured, brought to vivid life through McAuliffe's rich illustrations and evocative narrative.