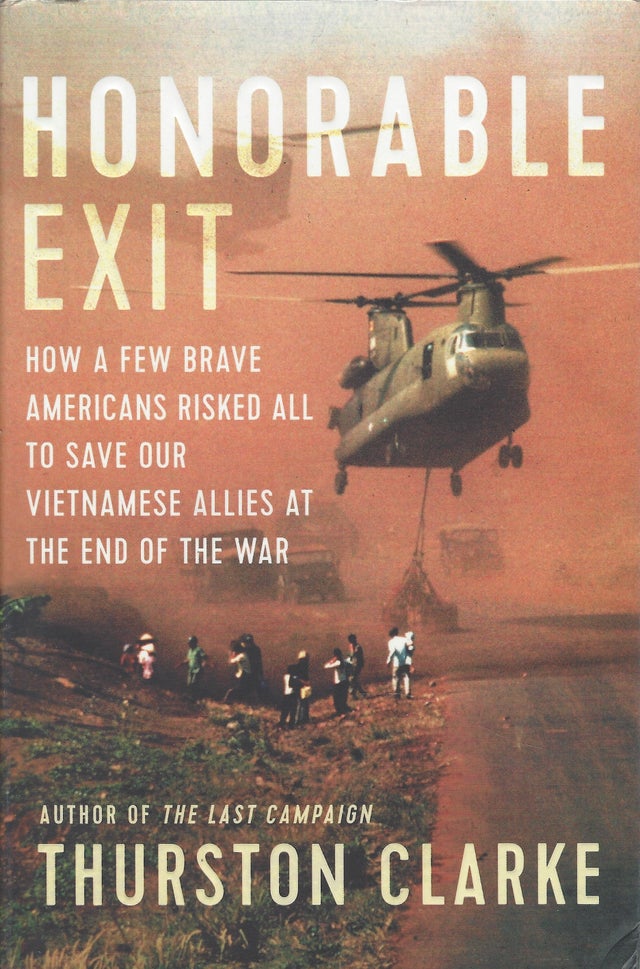 Honorable Exit: How a Few Brave Americans Risked All to Save Our Vietnamese Allies at the End of the War by Thurston Clarke

Honorable Exit: How a Few Brave Americans Risked All to Save Our Vietnamese Allies at the End of the War by Thurston Clarke

In 1973, U.S. participation in the Vietnam War ended in a cease-fire and a withdrawal that included promises by President Nixon to assist the South in the event of an invasion by the North. But in 1975, when North Vietnamese forces began a full-scale assault, Congress refused to send arms or aid. By early April of that year, the South was on the brink of a defeat that threatened execution or years in concentration camps for the untold number of South Vietnamese who had supported the government in Saigon or had worked with the Americans. In Honorable Exit, Thurston Clark narrates the little-known story of Americans who refused to abandon their friends and allies to that grim fate.

In the weeks before the last U.S. personnel were evacuated, scores of ordinary heroes -- diplomats, businessmen, soldiers, missionaries, contractors, and spies -- risked their lives, some returning to Vietnam from the United States, to assist their current and former translators, drivers, colleagues, neighbors, friends, and even perfect strangers in escaping. Clarke draws on unpublished memoirs and written accounts, oral histories, and new interviews to narrate these dramatic final days with meticulous fidelity and striking detail.

By the time Saigon fell on April 30, 1975, Americans had helped to spirit 130,000 South Vietnamese to U.S. bases in Guam and the Philippines. From there, the evacuees were resettled in the United States and became American citizens, the leading edge of one of America's most successful immigrant groups.

Into this tale of heroism on the ground, Clarke weaves the political machination of Henry Kissinger advising President Ford in the White House while reinforcing the delusions of the U.S. ambassador in Saigon, who, at the last minute refused to depart. Rich in indelible characterizations of Americans both legendary and forgotten and building to a devastating climax on the roof of the American embassy, Honorable Exit tells a deeply moving and unexpected tale of American honor redeemed.