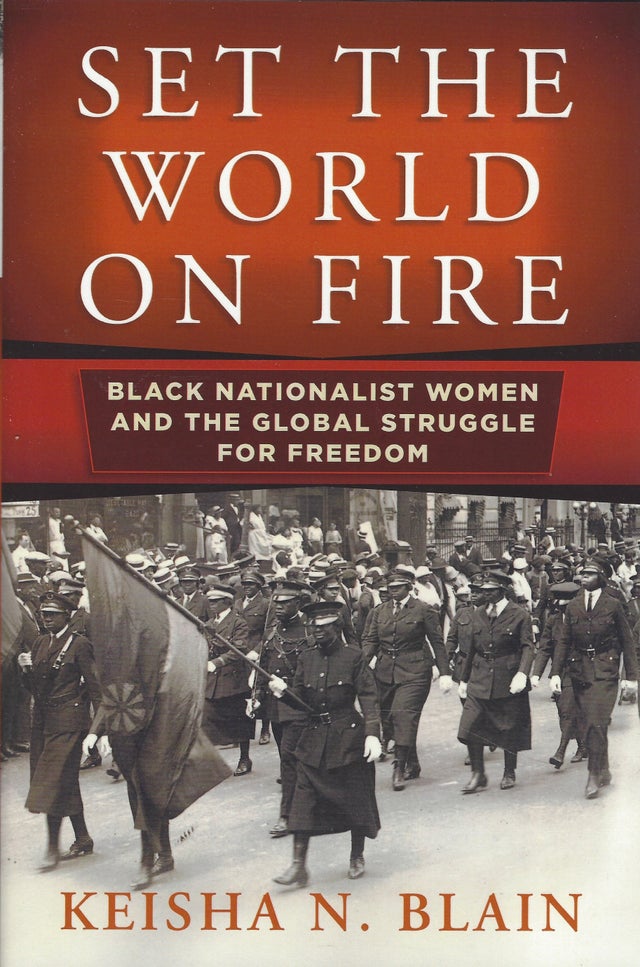 Set the World on Fire: Black Nationalist Women and the Global Struggle for Freedom by Keisha N. Blain

Set the World on Fire: Black Nationalist Women and the Global Struggle for Freedom by Keisha N. Blain

In 1932, Mittie Maude Lena Gordon spoke to a crowd of black Chicagoans at the old Jack Johnson boxing ring, rallying their support for emigration to West Africa. In 1937, Celia Jane Allen traveled to Jim Crow Mississippi to organize rural black workers around black nationalist causes. In the late 1940s, from her home in Kingston, Jamaica, Amy Jacques Garvey launched an extensive letter-writing campaign to defend the Greater Liberia Bill, which would relocate 13 million black Americans to West Africa.

Gordon, Allen, and Jacques Garvey -- as well as Maymie De Mena, Ethel Collins, Amy Ashwood, and Ethel Waddell -- are part of an overlooked and understudied group of black women who take center stage in Set the World on Fire, the first book to examine how black nationalist women engaged in national and global politics from the early twentieth century to the 1960s. Historians of the era generally portray the period between the Garvey movement of the 1920s and the Black Power movement of the 1960s as a time of declining black nationalist activism, but Keisha N. Blain reframes the Great Depression, World War II, and the early Cold War as significant periods of black nationalist -- and, particularly, black nationalist women's -- ferment.

In Chicago, Harlem, and the Mississippi Delta, from Britain to Jamaica, these women built alliances with people of color around the globe, agitating for the rights and liberation of black people in the United States and across the African diaspora. As pragmatic activists, they employed multiple protest strategies and tactics, combined numerous religious and political ideologies, and forged unlikely alliances in their struggles for freedom. Drawing on a variety of previously untapped sources, including newspapers, government records, songs, and poetry, Set the World on Fire highlights the flexibility, adaptability, and experimentation of black women leaders who demanded equal recognition and participation in global civil society.