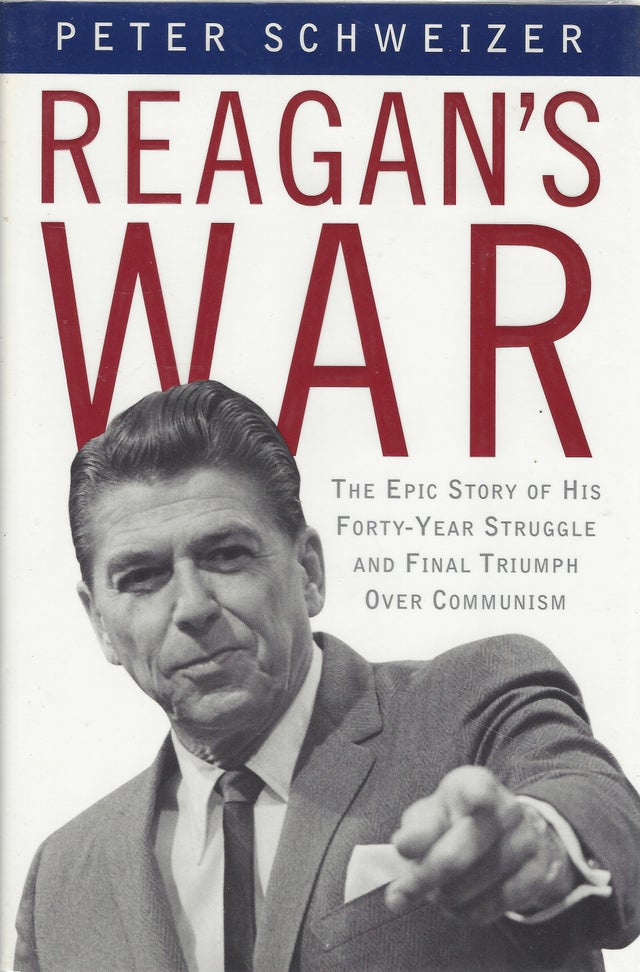 Reagan's War: The Epic Story of His Forty-Year Struggle and Final Triumph Over Communism by Peter Schweizer

Reagan's War: The Epic Story of His Forty-Year Struggle and Final Triumph Over Communism by Peter Schweizer

Ronald Reagan has been considered at best an amiable dunce, a genial actor who simply mouthed whatever slogans his right-wing puppet masters put in front of him. In Reagan's War, Peter Schweizer rehabilitates Reagan as President and statesman by revealing his fundamental role in making firm and aggressive anti-communism the central tenet of U.S. foreign policy, reversing decades of appeasement by other American presidents.

Reagan's War is the story of Ronald Reagan's personal and political journey as an anti-communist, beginning with his days in Hollywood, where he led the movie industry's resistance to an attempted communist takeover of Hollywood unions. The fight against communism became an obsession for Reagan, and it changed the whole direction of his life. Schweizer chronicles Reagan's anti-communist crusade from governor of California to the White House. Along the way, Reagan moved from an initial posture of containment to being an advocate of head-on confrontation. By the late 1960s, he was already calling for the overthrow of the Soviet Union and the destruction of the Berlin Wall. The goal of American policy, he said many times, should not be containment but "victory."

Reagan's criticism of Nixon's policy of detente, along with his earlier work in Hollywood, led Moscow to watch the emerging national politician closely. By the time he became President, Soviet officials had concluded that Reagan represented a genuine threat to their interests. They were right. To that extent, Reagan's enemies seem to have known him better than we did.

Schweizer details Reagan's economic and political war against Moscow, a war that he personally mapped out and directed, ignoring the advice of many experts in his own administration. Schweizer brings to light dozens of previously unknown facts about the Cold War, based on secret documents obtained from archives in Russia, Germany, Poland, Hungary, and the United States. Among his revelations are a North Korean and East German plot to assassinate Reagan in 1983; Reagan's secret funding of Solidarity in Poland; and the behind-the-scenes support that the Soviets and East Germans provided for European and American peace movements, as well as their clandestine contacts with U.S. government officials. Many of Schweizer's choicest revelations come from Reagan's KGB file, to which he has gained access.

A fresh, often startling look at Ronald Reagan and his central role in winning the struggle for global dominance in the 1980s, Reagan's War is a major work of Cold War revisionist history.