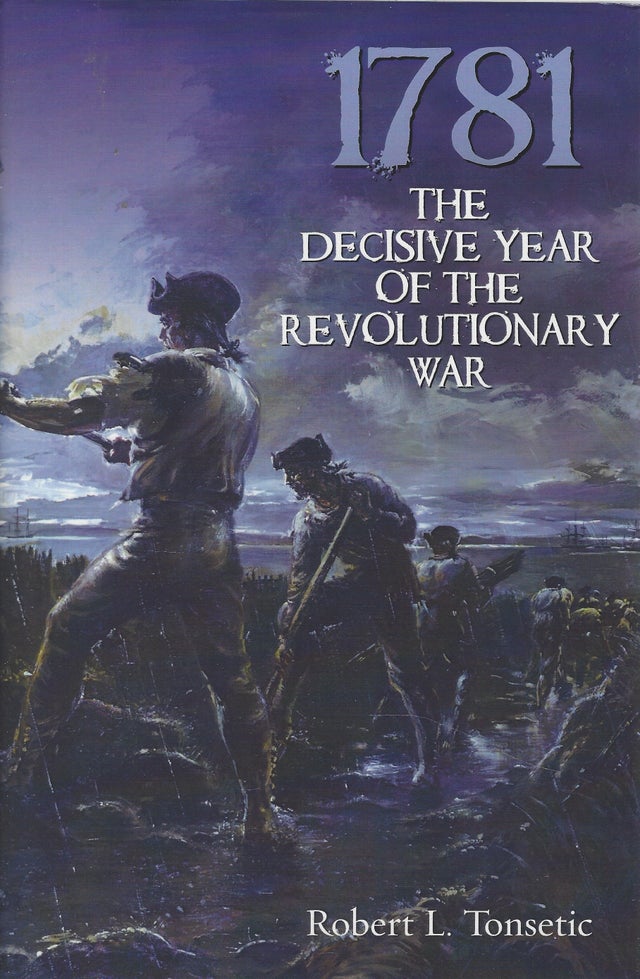 1781: The Decisive Year of the Revolutionary War by Robert L. Tonsetic

1781: The Decisive Year of the Revolutionary War by Robert L. Tonsetic

The Treaty of Paris in 1783 formally ended the American Revolutionary War, but it was the pivotal campaigns and battles of 1781 that decided the final outcome. 1781 was one of those rare years in American history when the future of the nation hung by a thread, and only the fortitude, determination, and sacrifice of its leaders and citizenry ensured its survival.

By 1781, America had been at war with the world's strongest empire for six years with no end in sight. British troops occupied key coastal cities, from New York to Savannah, and the Royal Navy prowled the waters off the American coast. The remaining Patriot forces hunkered down in the hinterland, making battle only at opportunities when British columns ventured near. But after several harsh winters and the failure of the nascent government to adequately supply the troops, the American army was approaching collapse. Mutinies began to emerge in Washington's ranks, the total number of regulars had dropped to below 10,000, and it was only the arrival of French troops that provided a ray of hope for the cause.

In 1781 the British began to prioritize the south. After shattering the American army under Horatio Gates at Camden, South Carolina, the British under Lord Cornwallis appeared unstoppable and were poised to regain the Carolinas, Georgia, and Virginia for the Crown. However, when General Nathaniel Greene arrived to take command of Patriot forces in the south, he was able to gradually turn the tables. By dividing his own forces, he forced the British to divide theirs, dissipating their juggernaut and forcing Cornwallis to confront a veritable hydra of resistance.

1781 was a year of battles, as the Patriot Daniel Morgan defeated the notorious Banastre Tarleton at Cowpens. Then Greene suffered a costly defeat at Guilford Courthouse, only to rally his forces and continue to fight on, assisted by such luminaries as Francis Marion, the "Swamp Fox," and "Light Horse Harry" Lee. Finally, it was Cornwallis who felt compelled to seek succor in Virginia. He marched his main army to Yorktown on the Peninsula, at which the French and British fleets, Green, Washington, and a French army all converged. In the brutal Battle of the Capes, the French fleet was able to hold off the renowned British navy, and on October 19, 1781, Cornwallis surrendered his weary and bloodied army.

With its focus on the climactic year of the war, 1781 is a valuable addition to the literature on the American Revolution, providing readers with a clear understanding of how America, just barely, with fortitude and courage, achieved its independence in the face of great odds.