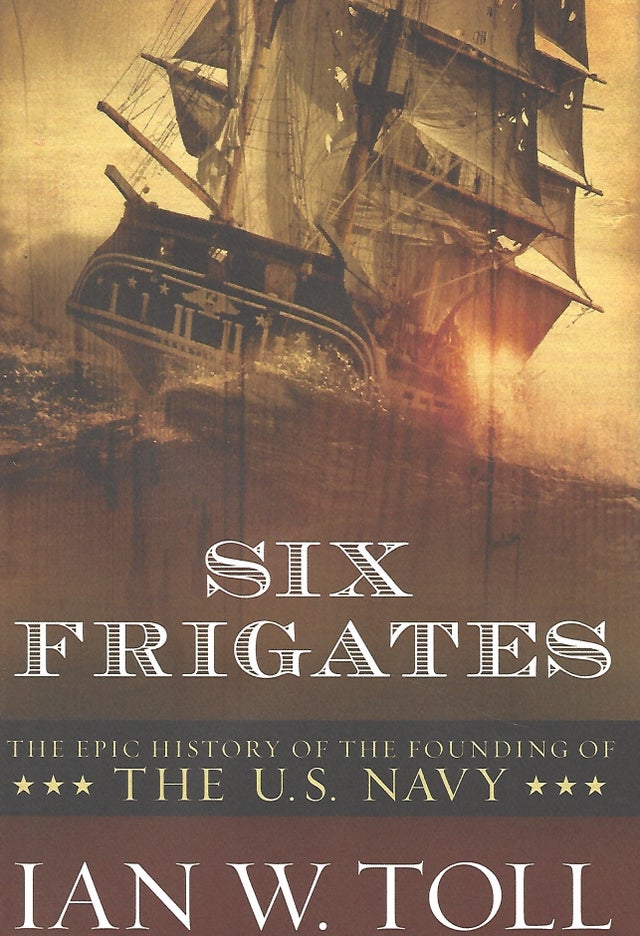 Six Frigates: The Epic History of the Founding of the U.S. Navy by Ian W. Toll

Six Frigates: The Epic History of the Founding of the U.S. Navy by Ian W. Toll

Before the ink was dry on the Constitution of the United States, the establishment of a permanent military had become the most divisive issue facing the young republic. Would a standing army be the thin end of dictatorship? Would a navy protect American commerce from the vicious depredations of the Barbary pirates, or would it drain the treasury and provoke hostilities with the great powers? The founders -- particularly Jefferson, Hamilton, Madison, and Adams -- debated these questions fiercely and switched sides more than once. How large a navy would suffice? Britain alone had hundreds of powerful warships.

In 1794, President Washington signed legislation authorizing the construction of six heavy frigates. (The frigate, smaller than a battleship and larger than a sloop, represented a unique combination of power, speed, and tactical versatility. In any navy, the frigates were sent on the most daring missions, and they fought the most dramatic single-ship actions of the Napoleonic era.) The American frigates were to be built at six major seaports: Portsmouth, Boston, New York, Philadelphia, Baltimore, and Norfolk. Entirely new domestic industries would be created, relying heavily on the extraction of natural resources -- hemp, jute, flax, ore, softwoods, and hardwoods -- from the backwoods of Maine to the uninhabited coastal islands of Georgia. It was the first great appropriation of federal money and the first demonstration of the power of the new central government.

From the complicated politics of the initial decision, through the cliffhanger campaign against Tripoli, to the war that shook the world in 1812, Ian W. Toll tells this grand tale with the political insight of Founding Brothers and a narrative flair worthy of Patrick O'Brian. In the words of Henry Adams, the 1812 encounter between the USS Constitution and HMS Guerriere "raised the United States in one-half hour to the rank of a first-class power in the world."