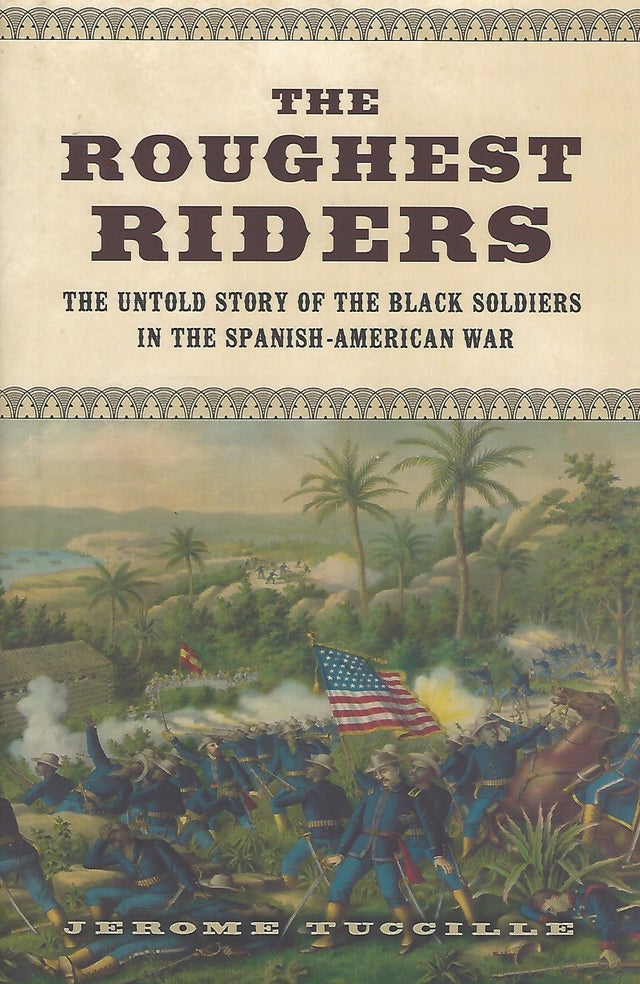 The Roughest Riders: The Untold Story of the Black Soldiers in the Spanish-American War by Jerome Tuccille

The Roughest Riders: The Untold Story of the Black Soldiers in the Spanish-American War by Jerome Tuccille

Buffalo Soldiers with Sumner's Ninth and Pershing's Tenth rushed ahead first, one of the men in the Tenth carrying his unit's guidon as they ascended to within fifty yards of the peak. They were whooping and yelling, the taste of victory in their mouths as they closed in on the enemy entrenchments. "By God, there go our boys up the hill! Yes, up the hill!" one of the troops yelled out astonished. A moment earlier, it had appeared that they would all be cut down.

The cries of impending victory grew louder as they charged ahead, with most of Roosevelt's remaining Rough Riders now beside the Buffalo Soldiers. Roosevelt was startled when a disoriented Spanish bugler, attempting to run away, ran into his arms instead and was taken prisoner. The yelling intensified when the first rank of Americans saw the Spaniards leaving their trenches and streaming southwest toward San Juan Hill, some returning fire as they ran, but most intent on avoiding the newly energized American army. The soldiers of the Tenth planted the guidon on the hill as the troops swarmed across the crest, with a clear view of the retreating defenders heading down the back slope in the direction of San Juan Hill. Roosevelt later claimed that the Rough Riders had planted their standard first, but one of his Rough Riders, Nova Johnson from New Mexico, said later, "You should have seen the amazement Colonel Teddy's face took on when he reached the top of that first ridge, only to find that the colored troopers had beat us up there."