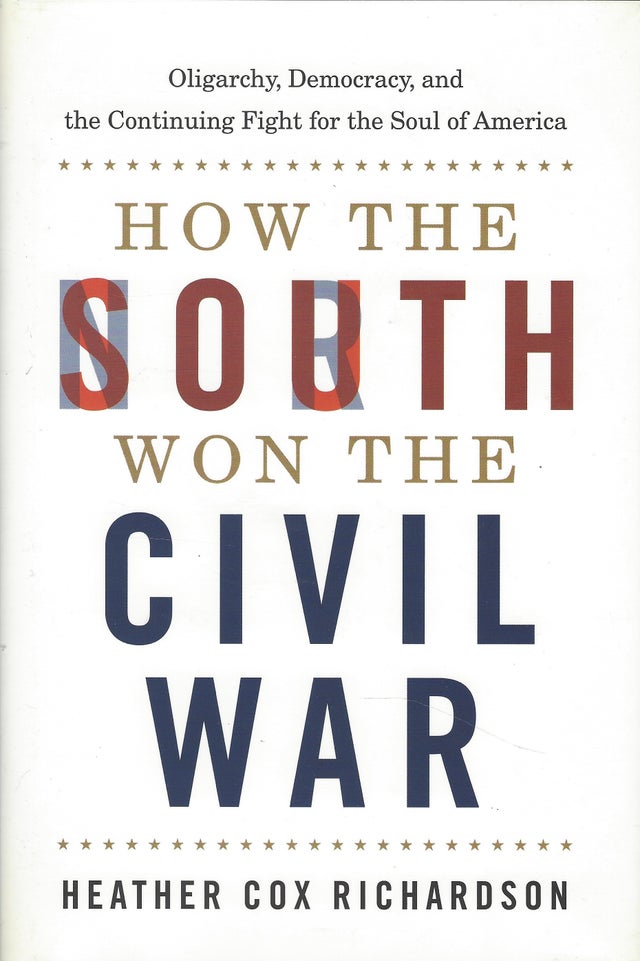 How the South Won the Civil War: Oligarchy, Democracy, and the Continuing Fight for the Soul of America by Heather Cox Richardson

How the South Won the Civil War: Oligarchy, Democracy, and the Continuing Fight for the Soul of America by Heather Cox Richardson

While the North prevailed in the Civil War, ending slavery and giving the country a "new birth of freedom," Heather Cox Richardson argues in this provocative work that democracy's blood-soaked victory was ephemeral. The system that had sustained the defeated South moved westward and there established a foothold. It was a natural fit. Settlers from the East had for decades been pushing into the West, where the seizure of Mexican lands at the end of the Mexican-American War and treatment of Native Americans cemented racial hierarchies. The South and West equally depended on extractive industries -- cotton in the former and mining, cattle, and oil in the latter -- giving rise to a new birth of white male oligarchy, despite the guarantees provided by the 13th, 14th, and 15th Amendments, and the economic opportunities afforded by expansion.

To reveal why this happened, How the South Won the Civil War traces the story of the American paradox, the competing claims of equality and subordination woven into the nation's fabric and identity. At the nation's founding, it was the Eastern "yeoman farmer" who galvanized and symbolized the American Revolution. After the Civil War, that mantle was assumed by the Western cowboy, singlehandedly defending his land against barbarians and savages as well as from a rapacious government. New states entered the Union in the late nineteenth century and western and southern leaders found yet more common ground. As resources and people streamed into the West during the New Deal and World War II, the region's influence grew. "movement Conservatives," led by westerners Barry Goldwater, Richard Nixon, and Ronald Reagan, claimed to embody cowboy individualism and worked with Dixiecrats to embrace the ideology of the Confederacy.

Richardson's searing book seizes upon the soul of the country and its ongoing struggle to provide equal opportunity to all. Debunking the myth that the Civil War released the nation from the grip of oligarchy, expunging the sins of the Founding, it reveals how and why the Old South not only survived in the West but thrived.