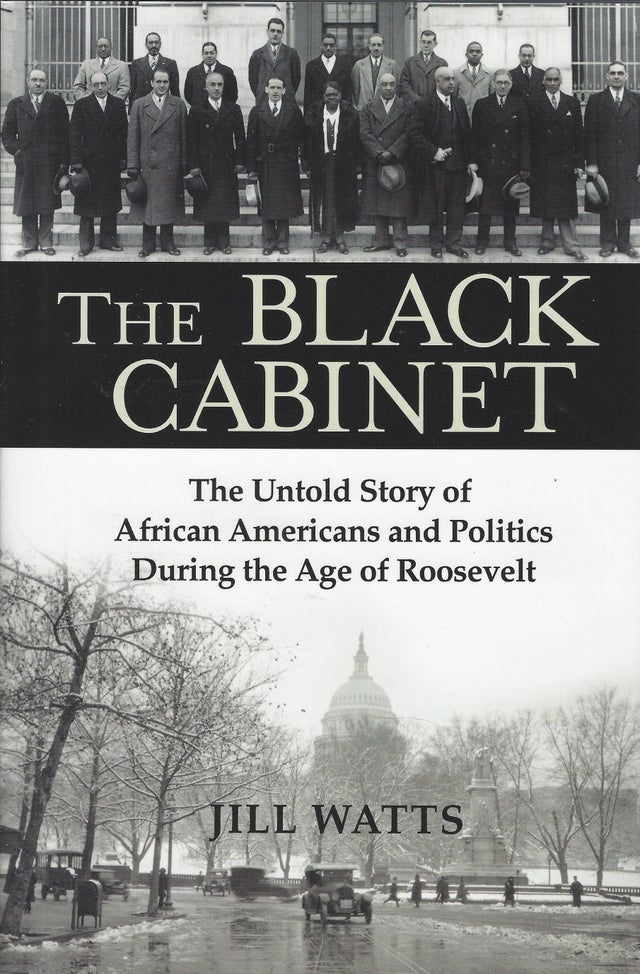 The Black Cabinet: The Untold Story of African Americans and Politics During the Age of Roosevelt by Jill Watts

The Black Cabinet: The Untold Story of African Americans and Politics During the Age of Roosevelt by Jill Watts

In 1932, in the midst of the Great Depression, Franklin Delano Roosevelt won the presidency with the help of key African American defectors from the Republican Party. At the time, most African Americans lived in poverty, denied basic citizenship rights, and terrorized by white violence. Indeed, as Roosevelt announced what would be his signature initiative, the black press wondered "Will the New Deal be a square deal for the Negro?" The Black Cabinet tells the story of the 'black Brain Trust" who joined the administration with an eye to squaring that deal, in an environment reluctant, often hostile, to change.

Economists, sociologists, lawyers, and journalists, the people who joined the Black Cabinet -- the black press's sobriquet -- had in common a desire to document and address the economic hardship and systemic inequalities African Americans faced, and to put the need for reform on the table. Led by Mary McLeod Bethune, an educator, and friend of Eleanor Roosevelt, they were instrumental to Roosevelt's continued success with black voters. But what they often found was the widespread exclusion of black people from the New Deal's programs, a reality they set out to combat by inventing tools to measure discrimination and by calling attention to the administration's failures.

Operating mostly behind the scenes, they helped push Roosevelt to sign an executive order that outlawed discrimination in the defense industry. They saw victories -- jobs and collective farming programs that lifted many from poverty -- and defeats -- the bulldozing of black neighborhoods to build public housing reserved only for whites; Roosevelt's failure to get behind federal anti-lynching legislation and to desegregate the military. The Black Cabinet never won official recognition from the president, and with his death, it disappeared from view. But it had changed history. Eventually one of its members would go on to be the first African American cabinet secretary; another, the first African American federal judge and mentor to Thurgood Marshall.

Masterfully researched and dramatically told, The Black Cabinet brings to life a forgotten generation of leaders who fought post-Reconstruction racial apartheid and whose work served as a bridge that civil rights activists traveled to achieve the victories of the 1950s and 1960s.