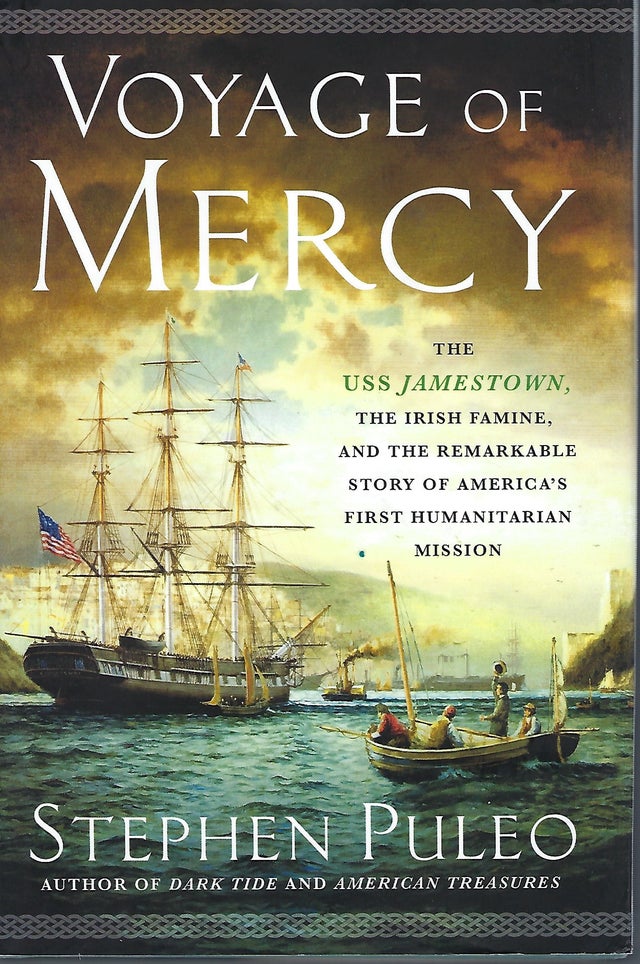 More than 5,000 ships left Ireland during the great potato famine in the late 1840s, transporting the starving and the destitute away from their stricken homeland. The first vessel to sail in the other direction, to help the millions unable to escape was the USS Jamestown, a converted warship, which left Boston in March 1847 loaded with precious food for Ireland.

In an unprecedented move by Congress, the warship had been placed in civilian hands, stripped of its guns, and committed to the peaceful delivery of food, clothing, and supplies in a mission that would launch America's first full-blown humanitarian relief effort.

Captain Robert Bennet Forbes and the crew of the USS Jamestown embarked on a voyage that began a massive eighteen-month demonstration of immense generosity at a time of profound despair -- one nation's struggle to survive, and another's effort to provide a lifeline. The Jamestown mission captured hearts and minds on both sides of the Atlantic, of the wealthy and the hardscrabble poor, of poets and politicians. Forbes's undertaking inspired a nationwide outpouring of relief that was unprecedented in size and scope, the first instance of an entire nation extending a hand to a foreign neighbor for purely humanitarian reasons. It showed the world that national generosity and brotherhood were not signs of weakness, but displays of quiet strength and moral certitude.

In Voyage of Mercy, Stephen Puleo tells the incredible story of the famine, the Jamestown's voyage, and the commitment of thousands of ordinary Americans to offer relief to Ireland, a groundswell that provided the collaborative blueprint for future relief efforts and established the United States as the leader in international aid. The USS Jamestown's heroic voyage showed how the ramifications of a single decision can be measured not in days, but in decades.