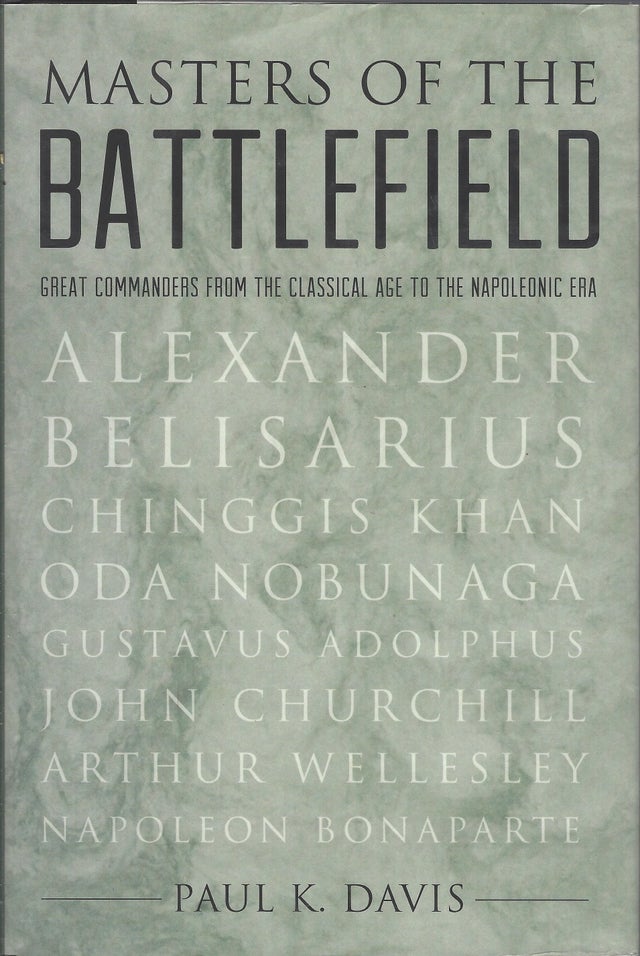 "The personality of a general is indispensable," Napoleon once said. "He is the head, he is the all, of an army" (c'est la tete, c'est le toud d'une armee). This book grows from the truth of that assertion. The general sets the tone and morale of an army, implements strategy over the course of a war, and leads his men on the battlefield. Here are history's greatest practioners of war, those whose presence was vital to the outcome of the battles, those who had the coup d'oeil, the ability to see and grasp in the blink of an eye the nature of the terrain and enemy deployment as well as how to exploit the enemy's weakness.

Drawing from historical and contemporary sources, Paul K. Davis, author of 100 Decisive Battles, offers portraits of fifteen commanders, from the earliest days of Greek warfare to France at the turn of the nineteenth century. As Davis establishes beyond doubt, these men stand out for their abilities -- operational, strategic, and tactical -- and for their leadership. Many would appear on anyone's list of military greats -- Alexander the Great, Hannibal, Napoleon -- and others will be less familiar, such as Belisarius and Oda Nobunaga. All of these commanders dominated their era and often were the first to implement the tactics and weaponry of their time. Davis describes the nature of armies and warfare of various historical moments, from the phalanx battles of Ancient Greece to the artillery-heavy Swedish army under Gustavus Adolphus. He also examines the course of the wars in which each general fought and focuses in detail on the particular battles that best illustrate their abilities. Finally, Davis analyzes in great depth the tactical skills and principles at which each general excelled.

Accompanied by nearly 100 detailed battlefield maps, Masters of the Battlefield is a remarkable synthesis of military history and human accomplishment. In analyzing these extraordinary leaders, Davis offers an exhaustive overview of the changing nature of warfare throughout history, and shows this history to be directed -- and often wholly decided -- by the abilities of a single man. Masters of the Battlefield tells the stories of men who defined eras, reshaped nations, and revolutionized the nature of warfare.

THIS IS A BRAND NEW BOOK. THERE IS A "CLOSEOUT/REMAINDER" MARK ON THE TOP PAGE EDGES.