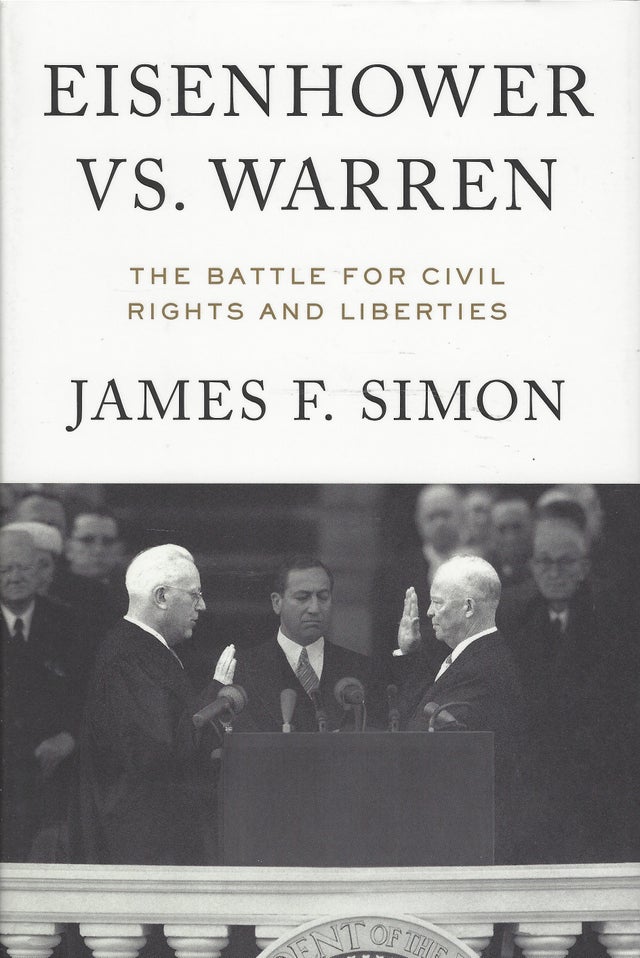 President Dwight D. Eisenhower and Chief Justice Earl Warren were two of the most revered American leaders of the twentieth century. Yet, when it came to the protection of basic civil rights and liberties, they staunchly disagreed on how best to move into an uncertain future -- and their disagreements disintegrated into mutual suspicion and harsh recrimination.

In Eisenhower vs. Warren, prize-winning legal historian James F. Simon examines the years of strife between them that led Eisenhower to say that his biggest mistake as president was appointing that "dumb son of a bitch Earl Warren." Warren, author of the Supreme Court's historic, unanimous opinion in Brown v. Board of Education, had demanded immediate action to dismantle the segregation of the public school system, While Eisenhower, who had built his reputation as a brilliant tactician and consensus builder in World War II, wanted to coax white Americans in the South into eventually accepting integration. This bitter, previously under-examined feud would do nothing less than frame the tumultuous future of the modern civil rights movement.

Eisenhower's "middle way" approach produced tangible long-term results, such as desegregating the military and naval yards and appointing judges at all levels in the federal court system who supported desegregation, but he was tight-lipped in public and withheld the loud endorsement of the Brown decision that Warren believed was necessary. Evolving from a broadly popular California politician known for working well with allies on both sides of the aisle, Chief Justice Warren, in one of the most astonishing transformations in American political history, became a crusader on the bench. In the age of McCarthy, Warren's defense of the civil liberties of suspected subversives demonstrated his broad vision of the Constitution's protections.

With the remarkable insight and nuanced legal analysis for which he is known, Simon delves into Eisenhower's and Warren's archival records and individual histories to reevaluate their legacies, demonstrating how critical the feud is to our understanding of the civil rights movement. Eisenhower vs. Warren brings to vivid life a clash of titans that still reverberates in political and constitutional debates today.