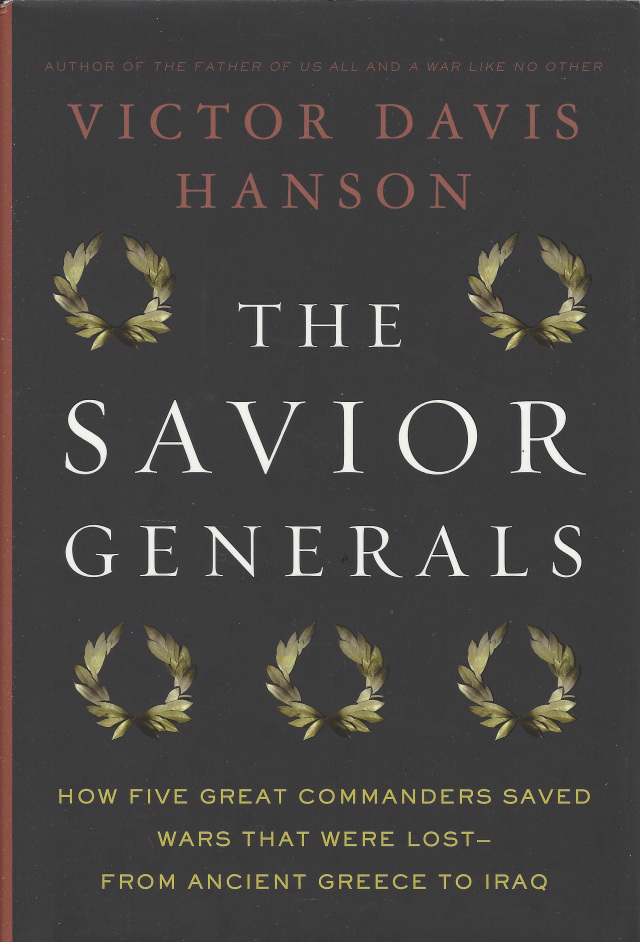 What wins wars? Is it the size of the armies or superior technology? Morale or brilliant strategic planning? All of these elements -- or, sometimes, random chance -- can determine victory or defeat. Yet if we look at the history of warfare, we repeatedly find that at certain critical moments, the leadership of a single individual can still matter more than these seemingly larger inanimate factors.

As Victor Davis Hanson shows us, often the greatest generals are not the ones who plan wars or lead their armies into the first battles. The real test of leadership comes when wars are given up for lost. Before the battle of Salamis, where the Greeks faced the mighty Persian Empire, they had already been crushed in engagements on land and sea. Most Greek commanders were debating the choice of flight or surrender. But one man, Themistocles, who refused to yield, changed the course of ancient history with a single stunning victory.

The Savior Generals gives us the story of five wars that were all but lost and the five generals who transformed defeat into victory: Themistocles; Belisarius, who held the frontier of Byzantium; William T. Sherman, whose victory at Atlanta in 1864 saved Abraham Lincoln's presidency; Matthew Ridgway -- known as "Old Iron Tits" for the grenades he wore on his chest -- who rescued the Korean War from Douglas MacArthur's disaster; and in our own century, David Petraeus, who reinvented counterinsurgency to prevent Iraq from falling into chaos.

Commanders like these, whom Hanson calls "savior generals," come from outside the established elites: they are the mavericks willing to toss the officers' manuals out the window and try radical strategies. For that reason, they rarely bask in glory when their wars are won: their contrarian personalities tend toward controversy (and even scandal) in peacetime, and their achievements are later downplayed by the same elites they embarrassed with their success. But their dramatic feats are unforgettable slices of history -- lessons in the dynamic nature of war, courage, and leadership.