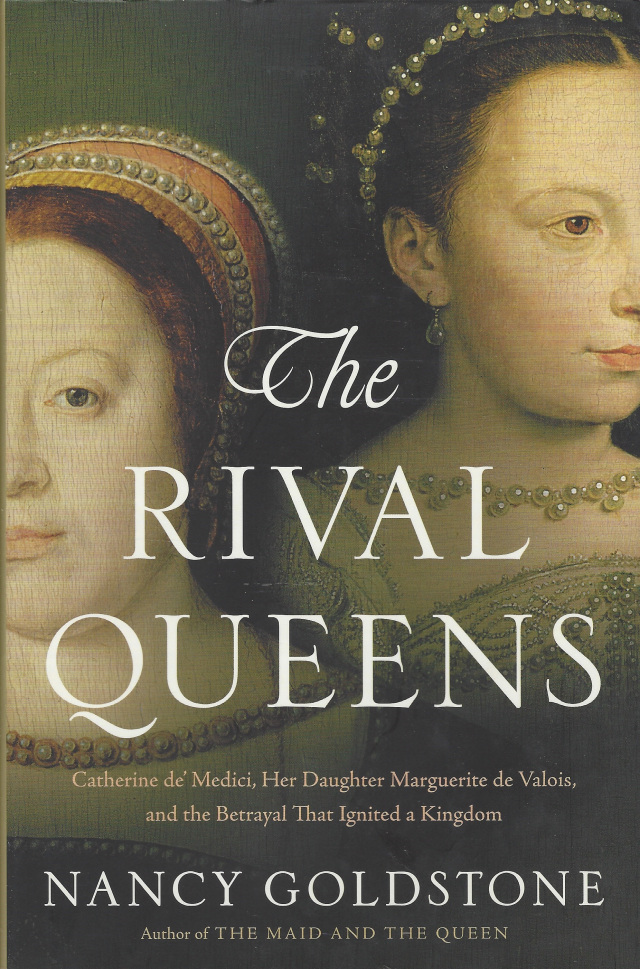 THE RIVAL QUEENS: CATHERINE DE' MEDICI, HER DAUGHTER MARGUERITE DE VALOIS, AND THE BETRAYAL THAT IGNITED A KINGDOM by Nancy Goldstone

The Rival Queens: Catherine de'Medici, Her Daughter Marguerite de Valois, and the Betrayal that Ignited a Kingdom by Nancy Goldstone

Set in magnificent Renaissance France, this is the gripping tale of two remarkable women -- cunning, power-hungry Catherine de' Medici and glamorous, passionate Marguerite de Valois -- a mother and daughter driven into opposition by a terrible act that threatened to destroy the realm.

Catherine, descendant of the wealthy and powerful Medici family of Florence, was known for her Machiavellian politics and ruthless ambition. She dominated the French throne for thirty years, during which time the kingdom was riven by religious differences as Catholics and Protestants struggled for ascendancy in the Wars of Religion. Her youngest daughter, Marguerite, universally admired as one of the most beautiful women in Europe, was a willful free spirit, and the only adversary whom her mother could neither intimidate nor control.

Acclaimed historian Nancy Goldstone brings to life their compelling drama as, under the guise of reconciliation, Catherine arranges to marry the devoutly Catholic Marguerite to her cousin Henry of Navarre, leader of the Protestant faction. Though in love with another, Marguerite goes through with the marriage. But only five days after the ceremony, Catherine initiates a violent purge that takes the lives of the groom's entire wedding party and more than five thousand Protestants throughout France. Marguerite -- captivating, intelligent, and generous -- is faced with an agonizing decision: to save her Protestant husband, and eventually the kingdom, she must sacrifice all hope of love.

Rich in detail and vividly told, The Rival Queens unfolds as a thrilling historical epic. Treacherous court politics, poisonings, international espionage, and adultery are threaded through a story that includes such celebrated figures as Elizabeth I, Mary, Queen of Scots, and Nostradamus. The Rival Queens is a dangerous tale of love, betrayal, ambition, and the true nature of courage, the echoes of which still resonate today.