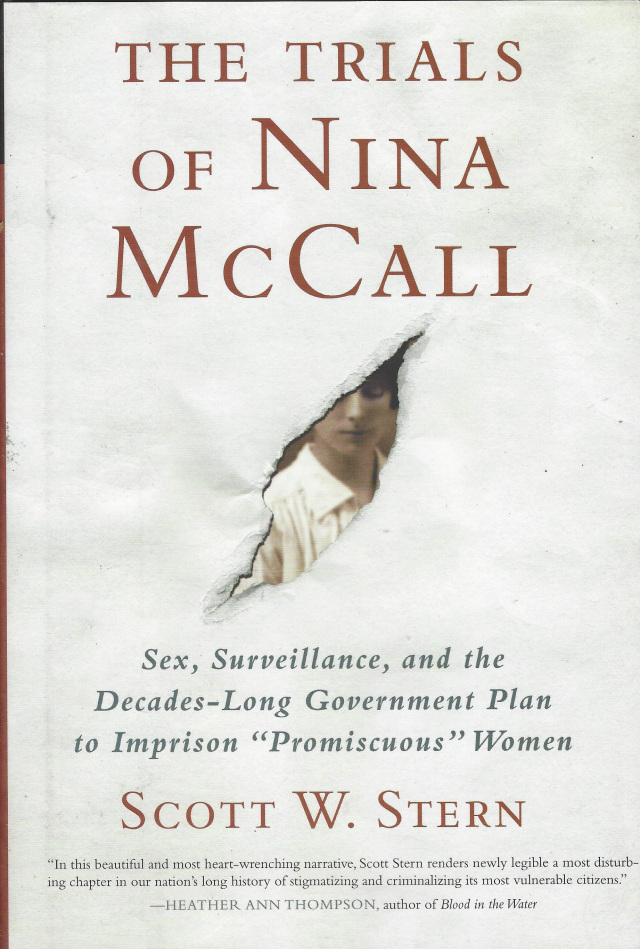 THE TRIALS OF NINA MCCALL: SEX, SURVEILLANCE, AND THE DECADES-LONG GOVERNMENT PLAN TO IMPRISON "PROMISCUOUS" WOMEN by Scott W. Stern

The Trials of Nina McCall: Sex, Surveillance, and the Decades-Long Government Plan to Imprison "Promiscuous" Women by Scott W. Stern

In 1918, shortly after her eighteenth birthday, Nina McCall was told to report to the local health officer to be examined for sexually transmitted infections. Confused and humiliated, Nina did as she was told, and the health officer performed a hasty (and invasive) examination and quickly diagnosed her with gonorrhea. Though Nina insisted she could not possibly have an STI, she was coerced into committing herself to Michigan's Bay City Detention Hospital, where she would spend almost three miserable months subjected to hard labor, exploitation, and painful injections of mercury.

Nina McCall was one of many women unfairly imprisoned by the U.S. government throughout the twentieth century. Tens, probably hundreds, of thousands of women and girls were locked up -- usually without due process -- simply because officials suspected these women were prostitutes, carrying STIs, or just "promiscuous."

This discriminatory program, dubbed the "American Plan," lasted from the 1910s into the 1950s, implicating a number of luminaries, including Eleanor Roosevelt, JOhn D. Rockefeller, Jr., Earl Warren, and even Eliot Ness, while laying the foundation for the modern system of women's prisons. In some places, vestiges of the Plan lingered into the 1960s and 1970s, and the laws that undergirded it remain on the books to this day.

Scott Stern tells the story of this almost forgotten program through the life of Nina McCall. Her story provides crucial insight into the lives of countless other women incarcerated under the American Plan. Stern demonstrates the pain and shame felt by these women and details the multitude of mortifications they endured, both during and after their internment. Yet thousands of incarcerated women rioted, fought back against their oppressors, or burned their detention facilities to the ground; they jumped out of windows or leaped from moving trains or scaled barbed-wire fences in order to escape. And, as Nina McCall did, they sued their captors. In an age of renewed activism surrounding harassment, health care, prisons, women's rights, and the power of the state, this virtually lost chapter of our history is vital reading.