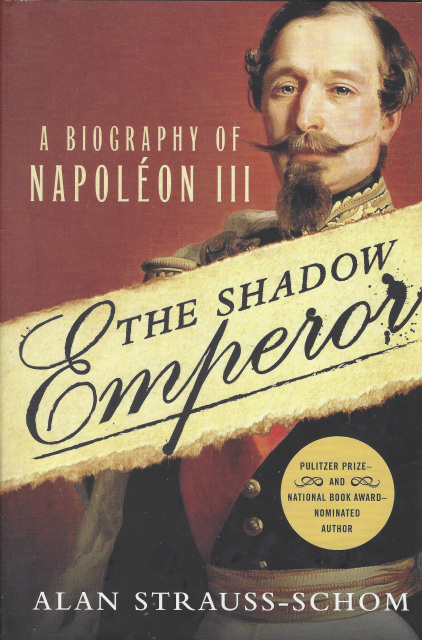 In many respects, even to the French, Louis Napoleon is an unacknowledged hero. He was the first head of state in France to hold the title of President of the Republic, and as Napoleon III, that of Emperor of the French. Alan Strauss-Schom's deeply researched and vividly realized The Shadow Emperor -- the first major biography of Napoleon III by an American -- chronicles the full range of Napoleon III's impact on French politics and commerce both domestic and international, as well as on social changes, infrastructure, finance, industry, military exploits, education, scientific research, and cultural trends -- issues and developments that still define France today.

Louis Napoleon's achievements represent a complete modernization of the country: the creation of the first nationwide rail network; the launching of the first international steamship lines and a powerful modern new navy; and the introduction of an entirely new banking sector supported by seemingly unlimited venture capital and newly created powerful state and corporate banks. At the same time, the first department stores, some still in existence, opened their doors to the middle classes, marking a veritable social revolution.

Napoleon III gutted the country's antiquated, eighteenth-century infrastructure, as demonstrated by the wholesale reconstruction of Paris begun in 1853 by Baron Haussmann -- a renovation evident in the spacious, tree-lined boulevards of the French capital today. The emperor also doubled the size of the French colonies, including Algeria, Indochina, New Caledonia, and much of West Africa, although the empire's troubles came back to haunt France in the form of bloody wars in the twentieth and twenty-first centuries, with millions of African and Asian refugees swelling the suburbs of French cities.

Alan Strauss-Schom's new all-encompassing biography will finally set the record straight on the Shadow Emperor's astonishing life and the vast long-term contributions he made to France and Europe.