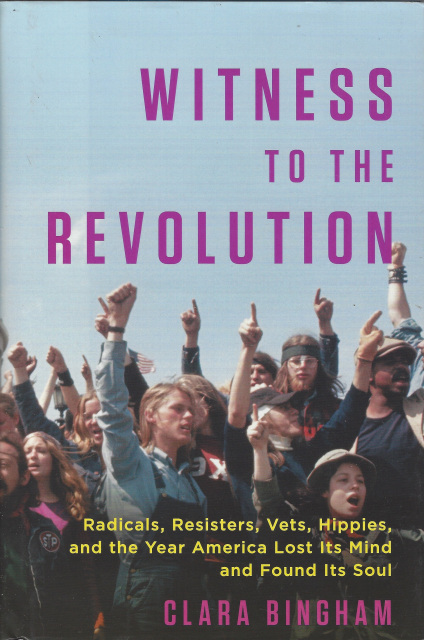 WITNESS TO THE REVOLUTION: RADICALS, RESISTERS, VETS, HIPPIES, AND THE YEAR AMERICA LOST ITS MIND AND FOUND ITS SOUL by Clara Bingham

Witness to the Revolution: Radicals, Resisters, Vets, Hippies, and the Year America Lost Its Mind and Found Its Soul by Clara Bingham

As the 1960s drew to a close, the United States was coming apart at the seams. From August 1969 to August 1970, the nation witnessed nine thousand protests and eighty-four acts of arson or bombings at schools across the country. It was the year of the My Lai massacre investigation, the Cambodia invasion, Woodstock, and the Moratorium to End the War. The American death toll in Vietnam was approaching fifty thousand, and the ascendant counterculture was challenging nearly every aspect of American society. Witness to the Revolution, Clara Bingham's unique oral history of that tumultuous time, unveils anew that moment when America careened to the brink of a civil war at home, as it fought a long, futile war abroad.

Woven together from one hundred original interviews, Witness to the Revolution provides a firsthand narrative of that period of upheaval in the words of those closest to the action -- the activists, organizers, radicals, and resisters who manned the barricades of what Students for a Democratic Society leader Tom Hayden called "the Great Refusal."

We meet Bill Ayers and Bernadine Dohrn of the Weather Underground; Daniel Ellsberg, the former Defense Department employee who released the Pentagon Papers; feminist theorist Robin Morgan; actor and activist Jane Fonda; and many others whose powerful personal stories capture the essence of an era. We witness how the killing of four students at Kent State turned a straitlaced social worker into a hippie, how the civil rights movement gave birth to the women's movement, and how opposition to the war in Vietnam turned college students into prisoners, veterans into peace marchers, and intellectuals into bombers.

With lessons that can be applied to our time, Witness to the Revolution is more than just a record of the death throes of the Age of Aquarius. Today, when America is once again enmeshed in radical turmoil, extended wars overseas, and distrust of the government, the insights contained in this book are more relevant than ever.