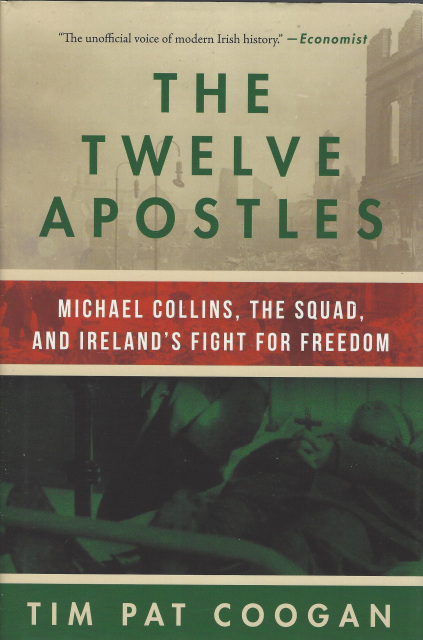 THE TWELVE APOSTLES: MICHAEL COLLINS, THE SQUAD, AND IRELAND'S FIGHT FOR FREEDOM by Tim Pat Coogan

The Twelve Apostles: Michael Collins, the Squad, and Ireland's Fight for Freedom by Tim Pat Coogan

After their release from English jails, the surviving rebels of the 1916 Easter Rising concentrated on fighting political battles under the banner of Sinn Fein. In the general election of December 1918, Sinn Fein won an overwhelming majority of parliamentary seats across ireland and, in early 1919, created the Dail, declaring it to be the parliament of the independent Irish Republic.

When Westminster declared the Dail illegal, a vicious guerrilla war broke out between the Irish Republican Army and crown security forces. To counter Britain's efficient network of spies and informants, IRA intelligence chief Michael Collins created an elite "Squad" whose role was to assassinate British agents and undercover police. The mayhem created by the "Twelve Apostles" culminating in the events of "Bloody Sunday" in November 1920, would eventually bring the British to the negotiating table -- and hasten Irish independence.

As well as describing the deadly activities of the Squad during the War of Independence, bestselling author and historian Tim Pat Coogan also explores the psychological impact of that violence on men -- who were mostly Mass-attending Irishmen -- and examines the darker role by certain "Apostles" in the Irish Civil War.