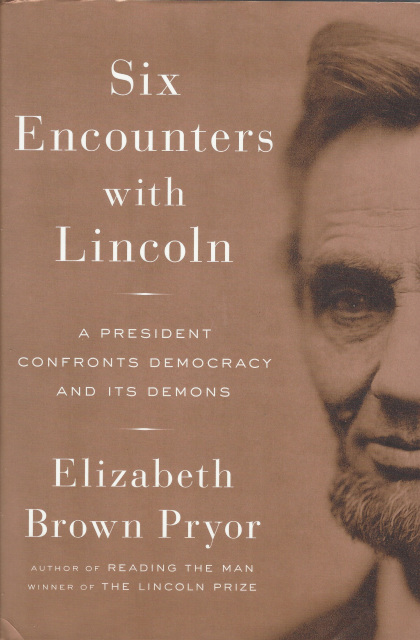 SIX ENCOUNTERS WITH LINCOLN: A PRESIDENT CONFRONTS DEMOCRACY AND ITS DEMONS by Elizabeth Brown Pryor

Six Encounters with Lincoln: A President Confronts Democracy and Its Demons by Elizabeth Brown Pryor

In this absorbing book, Elizabeth Brown Pryor offers new perspectives on our sixteenth president by examining six intriguing, mostly unknown encounters he had with his constituents. Taken together, they reveal his opinions and character in unexpected ways, illustrating the difficulties of managing a republic and creating a presidency.

While each of these stories shows how Lincoln in all his quirky greatness, each is also an invitation to rethink our presumptions about him. An awkward first meeting with army officers on the eve of the Civil War reflects Lincoln's unease with military culture, giving insight into his erratic management of the Union forces during the war. A conversation between Lincoln and a fiercely abolitionist cavalry sergeant enables Pryor to probe into how cautiously Lincoln moved on the emancipation issue; it was his ability to inch along the narrow road of consensus that defined his political skill.

Lincoln's meeting with Cherokee chief John Ross leads Pryor to explore how catastrophic the Lincoln administration was for Native Americans -- and how poignant, given Lincoln's reputation as a defender of human rights. Pryor teases out the reasons behind Lincoln's discomfort with the strong-minded women who came to him on political business and, in recounting a tense exchange with a Confederate businessman in 1865, addresses Lincoln's tortured relationship with the South and the toll it took on him. Pryor also provides a fascinating discussion of Lincoln's fondness for storytelling and how he used his skills as a raconteur to enhance both his political and his personal power.

Drawing on hundreds of firsthand accounts from reporters, diarists, and letter writers that give the narrative great immediacy, Six Encounters with Lincoln provides a fresh portrait of Lincoln as a beleaguered politician who was not especially popular, who had to deal with many critics, naysayers, and dilemmas he faced without always knowing the right answer. What this book shows most clearly is that greatness was not simply laid on Lincoln's shoulders like a mantle, but was won in fits and starts.