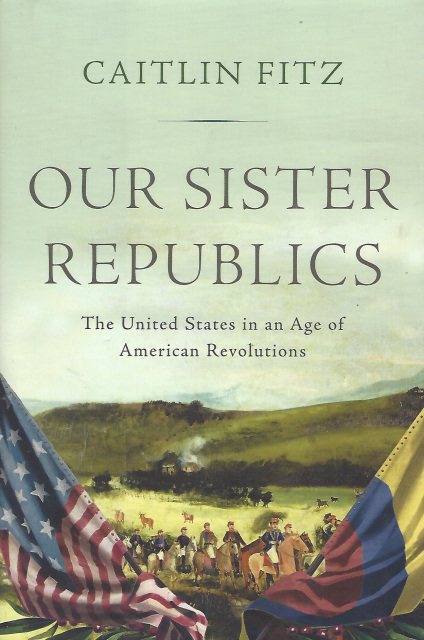 OUR SISTER REPUBLICS: THE UNITED STATES IN AN AGE OF AMERICAN REVOLUTIONS by Caitlin Fitz

Our Sister Republics: The United States in an Age of American Revolutions by Caitlin Fitz

In the early nineteenth century, the United States emerged from its second war with England and turned its idealistic gaze southward, imagining a legacy of republican revolution it hoped would dominate the American hemisphere. In Our Sister Republics, Caitlin Fitz reveals the glaring contradiction between fervent early enthusiasm for idealistic unity and the ominous change of heart that followed.

Marshaling groundbreaking research, Fitz investigates the period between 1776 and 1826 anew, tracing shifting U.S. attitudes toward anti-colonial revolts south of the border. At first, U.S. onlookers were elated by the exhilarating spread of republicanism in Latin America; as one Kentucky congressman heartily declared, this turbulent period following the Revolution was a "jubilee of nations," with Latin Americans echoing the burgeoning United States in quests for independence. From bustling port cities to mid-western farms and southern plantations, an adolescent nation hailed these newly independent "sister republics" as glorious tropical reprises of 1776. Fitz creates a stunning narrative of this inter-American camaraderie: Appalachian farmers read poetry about Andean independence; sailors wore cockades for revolutionary Montevideo; and boozy party-goers sang in honor of Venezuelan freedom. This fervor demonstrated both an enduring conviction in independence and an out-sized notion of the young republic as cartographer of a new world order.

But as slavery became a bitterly divisive issue in the United States, so goodwill toward these revolutionaries -- whose battles were often anti-colonial and antislavery -- waned. By the nation's fiftieth anniversary, Latin American independence efforts became a platform upon which many in the United States erected new ideological borders that would come to haunt the geopolitical landscape for generations.

Fitz's rich, engrossing history places the young republic on a transnational stage to reveal the surprising evolution of American exceptionalism. Our Sister Republics underlines a hugely significant, previously unacknowledged turning point in U.S. history, one that deepened the chasms precipitating civil war and shaped popular understandings of revolution and republicanism well into the twentieth century.