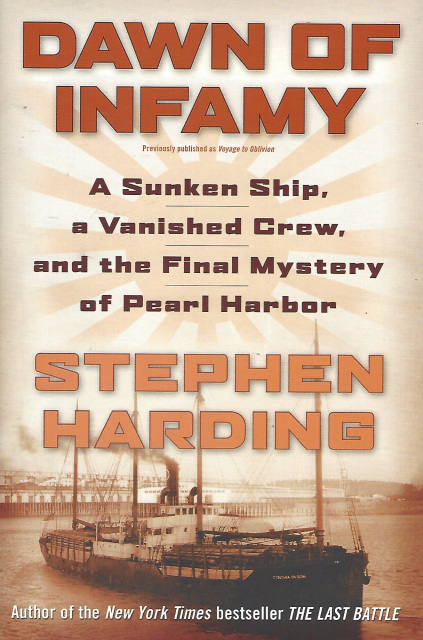 DAWN OF INFAMY: A SUNKEN SHIP, A VANISHED CREW, AND THE FINAL MYSTERY OF PEARL HARBOR by Stephen Harding

Dawn of Infamy: A Sunken Ship, a Vanished Crew, and the Final Mystery of Pearl Harbor by Stephen Harding

On December 7, 1941, even as Japanese carrier-launched aircraft flew toward Pearl Harbor, a small American cargo ship chartered by the Army reported that it was under attack by a submarine halfway between Seattle and Honolulu. After that one cryptic message, the humble lumber carrier Cynthia Olson and her crew vanished without a trace, their disappearance all but forgotten as the mighty warships of the U.S. Pacific Fleet burned.

The story of the Cynthia Olson's mid-ocean encounter with the Japanese submarine I-26 is both a classic high-seas drama and one of the most enduring mysteries of World War II. Did I-26's commander, Minoru Yokota, sink the freighter before the attack on Pearl Harbor begin? Did the cargo ship's 35-man crew survive in lifeboats that drifted away into the vast Pacific, or were they machine-gunned to death? Was the Cynthia Olson the first American casualty of the Pacific War, and could her SOS have changed the course of history?

Based on years of research, Dawn of Infamy explores both the military and human aspects of the Cynthia Olson story, bringing to life a complex tale of courage, tenacity, hubris, and arrogance in the opening hours of America's war in the Pacific.