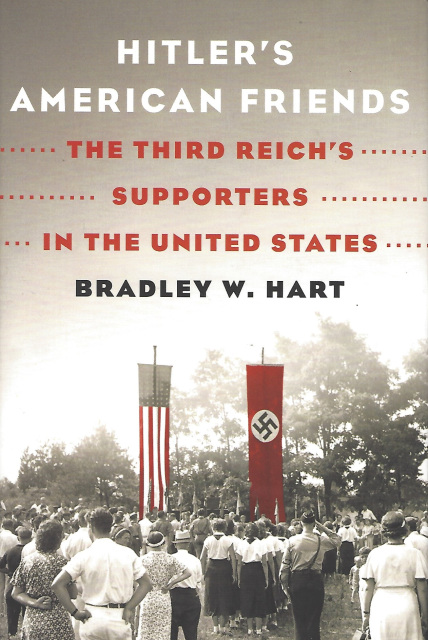 Americans who remember World War II reminisce about how it brought the country together. The less popular truth behind this warm nostalgia: until the attack on Pearl Harbor, the nation was deeply, dangerously divided. In Hitler's American Friends, Bradley W. Hart uncovers the homegrown groups who sought to protect and promote Hitler, leave Europeans (and especially European Jews) to fend for themselves, and elevate the Nazi regime.

Some of these "friends" were Americans of German heritage who joined the Bund, whose leadership dreamed of installing a stateside Fuhrer. Some were as bizarre and hair-raising as the Silver Legion, run by an eccentric who claimed that Hitler fulfilled a religious prophesy. Some were mid-western Catholics like Father Charles Coughlin, an early right-wing radio star who broadcast anti-Semitic tirades.

Some were even members of Congress, who used their franking privilege -- sending mail at cost to American taxpayers -- to distribute German propaganda. And celebrity pilot Charles Lindbergh ended up speaking for them all at the America First Committee.

We try to tell ourselves it couldn't happen here, but Americans are not immune to the lure of fascism. Hitler's American Friends is a powerful look at how the forces of evil manipulate ordinary people -- and how we stepped back from the ledge.