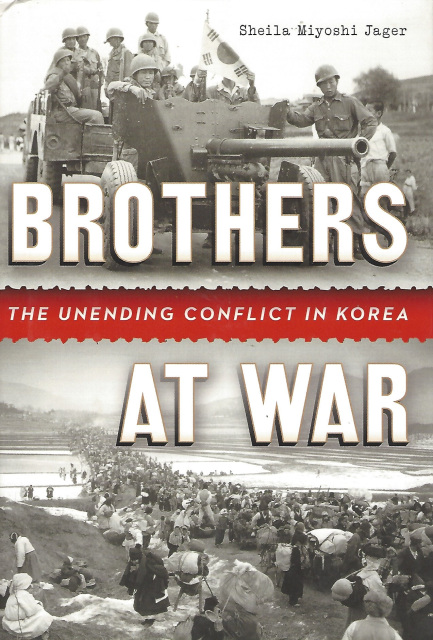 BROTHERS AT WAR: THE UNDENDING CONFLICT IN KOREA by Sheila Miyoshi Jager

Brothers at War: The Unending Conflict in Korea by Sheila Miyoshi Jager

More than sixty years after North Korean troops crossed the 38th parallel into South Korea, the Korean War is still not over. Yet the Korean War has become a forgotten episode in American history. Brothers at War changes that.

Sheila Miyoshi Jager combines international events with previously unknown personal accounts to create a brilliant new history of that war. From American, Korean, Soviet, and Chinese perspectives, she explores its origins, development, and global implications. Jager narrates an epic story that begins in mid-World War II< when Roosevelt, Stalin, and Churchill fiercely debated the possibility of Korean independence, and ends in the present day as North Korea, with China's aid, starves its population as it stockpiles nuclear weapons. Drawing on newly accessible archives in several nations, this is the first account to examine both the military and the social, cultural, and political aspects of the war and its impact across the entire region.

Jager also brings to life in lucid narrative prose the bitter struggles of the Cold War. She reveals how the ongoing conflict between the two Koreas -- a "brother's war" -- continued to influence event, with important and tragic consequences for the region and the world. Her portraits of the many fascinating characters that populate this history -- Truman, MacArthur, Kim Il Sung, Mao, Stalin, and Park Chung Hee -- illustrate the complex and tangled nature of the Korean conflict. Not the least of her revelations are the repercussions the conflict has had on statesmen, soldiers, and ordinary people alike, and especially the millions of hungry North Koreans for whom daily existence continues to be a nightmarish ordeal.

The most up-to-date, and balanced account yet written, illustrated with dozens of documentary photographs and detailed maps, Brothers at War is the defining chronicle of the conflict in Korea -- its escalation, aftermath, and continuing importance in global politics.