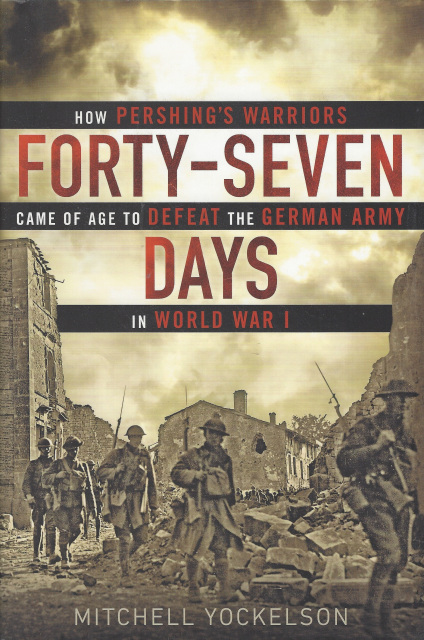 FORTY-SEVEN DAYS: HOW PERSHING'S WARRIORS CAME OF AGE TO DEFEAT THE GERMAN ARMY IN WORLD WAR I by Mitchell Yockelson

Forty-Seven Days: How Pershing's Warriors Came of Age to Defeat the German Army in World War I by Mitchell Yockelson

The Battle of the Meuse-Argonne stands as the deadliest clash in American history: More than a million untested American soldiers went up against a better-trained and experienced German army, costing more than twenty-six thousand deaths and leaving nearly a hundred thousand wounded. Yet in forty-seven days of intense combat, those Americans pushed back the enemy and forced the Germans to surrender, bringing the First World War to an end -- a feat the British and the French had not achieved after more than three years of fighting.

In Forty-Seven Days, historian Mitchell Yockelson tells how General John J. "Black Jack" Pershing's exemplary leadership led to the unlikeliest of victories. Appointed commander of the American Expeditionary Forces by President Wilson, Pershing personally took command of the U.S. First Army until supplies ran low and the fighting ground to a stalemate. Refusing to admit defeat, Pershing stepped aside and placed gutsy Lieutenant General Hunter Liggett in charge. While Pershing retained command, Liggett reorganized his new unit, resting and resupplying his men, while instilling a confidence in the doughboys that drove them out of the trenches and across no-man's land.

Offering an abundance of new details and insight, Forty-Seven Days is the definitive account of the First Army's hard-fought victory in World War I -- and the revealing tale of how our military came of age in its most devastating battle.