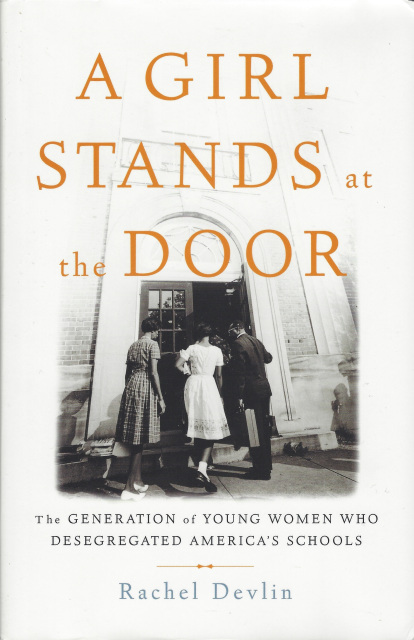 A GIRL STANDS AT THE DOOR: THE GENERATION OF YOUNG WOMEN WHO DESEGREGATED AMERICA'S SCHOOLS by Rachel Devlin

A Girl Stands at the Door: The Generation of Young Women Who Desegregated America's Schools by Rachel Devlin

Long before the landmark Brown v. Board of Education ruling in 1954, the struggle to desegregate America's schools was a grassroots movement -- and young women were its vanguard. In the 1940s parents and daughters began filing desegregation lawsuits, eventually forcing Thurgood Marshall and other civil rights lawyers to take the issue to the Supreme Court. After Brown v. Board, girls also far outnumbered boys in volunteering to desegregate all-white schools.

A GIRL STANDS AT THE DOOR transforms our understanding of one of the twentieth century's most significant civil rights battles, revealing a movement set in motion by deeply committed, savvy, and resilient girls and young women. Among them were Lucile Bluford, who fought to desegregate the University of Missouri's School of Journalism and became the movement's leading chronicler as a reporter and editor; Marguerite Carr, Coris Rae Jennings, and Doris Faye Jennings, teenagers who became the public faces of desegregation cases years before Brown; and the many young women who stood up to enraged protestors, hostile teachers, and hateful white students while integrating classrooms across the Deep South. Drawing on personal interviews and new archival research, historian Rachel Devlin explains why black girls were seen, and saw themselves, as best suited -- and thus most responsible -- for the arduous labor of reaching across the color line in public schools.

A bold and surprising new history of school desegregation, A GIRL STANDS AT THE DOOR shows how the extraordinary bravery of young black women made racial integration in schools a political priority and an imaginable reality. Illuminating their unrecognized leadership, Devlin reminds us to see women's ongoing work in social movements for racial equality today.