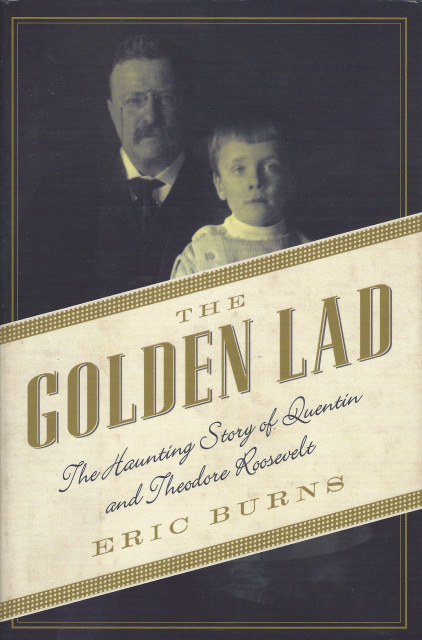 THE GOLDEN LAD: THE HAUNTING STORY OF QUENTIN AND THEODORE ROOSEVELT by Eric Burns

The Golden Lad: The Haunting Story of Quentin and Theodore Roosevelt by Eric Burns

More than a century has passed since Theodore Roosevelt was in the White House, but he still continues to fascinate. Never has a more exuberant man been our nation's leader. He became a war hero, reformed the NYPD, busted the largest railroad and oil trusts, passed the Pure Food and Drug Act, created national parks and forests, won the Nobel Peace Prize, and built the Panama Canal.

He was a bellicose man -- one who believed in war -- and he was not satisfied with the Spanish-American War and his role as a Rough Rider. When the Great War broke out, it became the cause he championed the hardest. But America's entry into World War I would not end as Theodore thought it would and it would ultimately divide and destroy him.

All of his sons would eagerly enlist, including his youngest son, Quentin. How does looking at Theodore's relationship with this son, and understanding him as a father, tell us something new about this larger-than-life-man? Does it reveal a more human side? A more hypocritical side? Or a nature so surprisingly sensitive, hidden beneath all the bluster?

Roosevelt's own history of boyhood illness made him especially aware of what it was like to be a child in pain, thus he could not bear the thought of his own children suffering. And it was the baby, Quentin, who worried his father the most. Yet it was Quentin who would display the most intellect and courage of all.