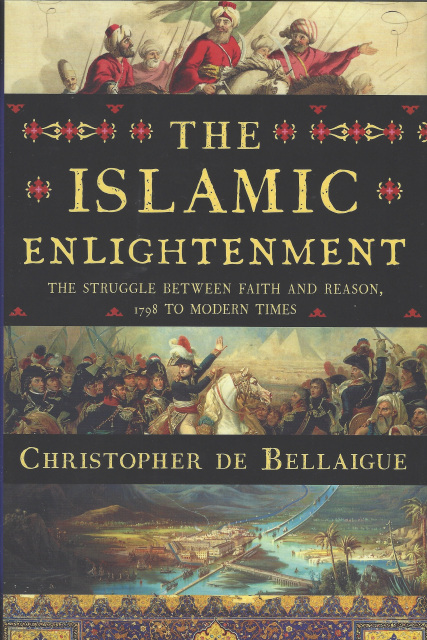 With majestic prose, Christopher de Bellaigue presents an absorbing account of the political and social reformations that transformed the lands of Islam in the nineteenth and early twentieth centuries. Flying in the face of everything we thought we knew, THE ISLAMIC ENLIGHTENMENT becomes a revelatory history that offers a game-changing assessment of the Middle East since the Napoleonic Wars.

Beginning his account in 1798, de Bellaigue demonstrates how Middle Eastern heartlands have long welcomed modern ideals and practices, including the adoption of modern medicine, the emergence of women from seclusion, and the development of democracy. With trenchant political and historical insight, de Bellaigue further shows how the violence of an infinitesimally small minority is n fact the tragic blowback from these modernizing processes.

Structuring his chronicle around Istanbul, Cairo, and Tehran, the three main loci of Islamic culture, de Bellaigue directly challenges ossified perceptions of a supposedly benighted Muslim world through the forgotten, and inspiring, stories of philosophers, anti-clerics, journalists, and feminists who opened up their societies to political and intellectual emancipation. His sweeping and vivid account includes remarkable men and women from across the Muslim world, including Ibrahim Sinasi, who brought newspapers to Istanbul; Mirza Saleh Shirzi, whose Persian memoirs describe how the Turkish harems were finally shuttered; and Qurrat al-Ayn, an Iranian noblewoman, who defied her husband to become a charismatic prophet.

What makes THE ISLAMIC ENLIGHTENMENT particularly germane is that non-Muslim pundits in the post-9/11 era have repeatedly called for Islam to subject itself to the transformations that the West has already achieved since the Enlightenment -- the absurd implication being that if Muslims do not stop reading or following the tenets of the Qur'an and other holy books, they will never emerge from a benighted state of backwardness. Revolutionary in its argument, THE ISLAMIC ENLIGHTENMENT completely refutes this view and, in the process, reveals the folly of Westerners demanding modernity from those whose lives are already drenched in it.