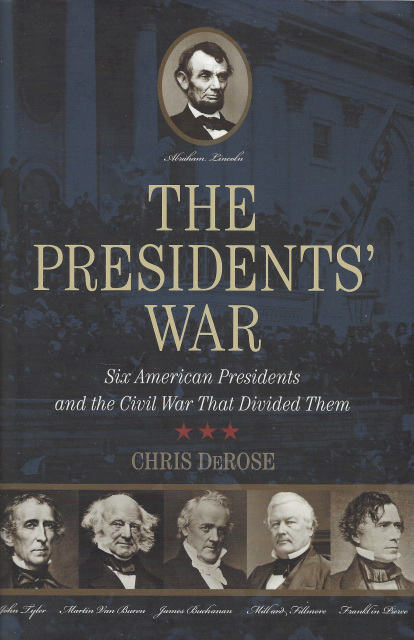 THE PRESIDENT'S WAR: SIX AMERICAN PRESIDENTS AND THE CIVIL WAR THAT DIVIDED THEM by Chris DeRose

The Presidents' War: Six American Presidents and the Civil War that Divided Them by Chris DeRose

For the first time, experience America's gravest crisis through the eyes of the five former presidents who lived it. Author and historian Chris DeRose chronicles history's most epic presidential melee, as a record number of living presidents challenged, advised, supported, and opposed Abraham Lincoln while he struggled to preserve the Union and destroy slavery.

John Tyler engaged in shuttle diplomacy between President Buchanan and the new Confederate Government, chaired the failed Peace Convention of 1861, then joined the Virginia Secession Convention and served in the Confederate Congress, where he urged a Confederate takeover of Washington.

Franklin Pierce, talked about as a Democratic candidate in 1860 and '64, was openly supportive of the South and outspoken against the president, especially on civil liberties. After a battle with the administration over charges of treason, Pierce's secret correspondence with Jefferson Davis was revealed.

Millard Fillmore hosted Lincoln and Mary Todd on their way to Washington, supported the war effort, raised a national guard unit, offered advice to keep Britain at bay, but turned on Lincoln over emancipation.

James Buchanan, who had left office as seven states had broken away from the Union, Frantically tried to vindicate his administration, in part by supporting the war and arguing that Lincoln had simply followed his policies.

And Martin Van Buren schemed to deny Lincoln the presidency, supported him in his efforts after Fort Sumter, and thwarted Franklin Pierce's attempt at a meeting of the ex-presidents to undermine the president.

Chris DeRose's masterfully told chronicle of how Abraham Lincoln battled with and against his predecessors during the Civil War is a thrilling tale of war waged at the top level of power.