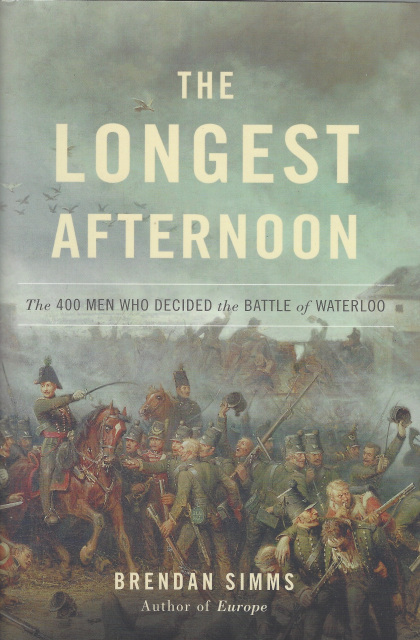 In 1815, the deposed emperor Napoleon returned to France and threatened the already devastated and exhausted continent with yet another war. Near the small Belgian municipality of Waterloo, two large, hastily mobilized armies faced each other to decide the future of Europe -- Napoleon's forces on one side, and the Duke of Wellington on the other.

With so much at stake, neither commander could have predicted that the battle would be decided by the Second Light Battalion, King's German Legion, which was given the deceptively simple task of defending the Haye Sainte farmhouse, which dominated a crucial crossroads on the way to Brussels. In THE LONGEST AFTERNOON, Brendan Simms recounts how these 400-odd riflemen beat back wave after wave of French infantry until finally forced to withdraw, but only after holding up Napoleon for so long that he lost the overall contest. Their actions decided the most influential battle in European history. Drawing on previously untapped eye-witness reports for accurate and vivid details of the course of the battle, Simms captures the grand choreography and pervasive chaos of Waterloo: the advances and retreats, the death and the maiming, the heroism and the cowardice. He describes the gallant fighting spirit of the French infantrymen, who clambered over the bodies of their fallen comrades as they assaulted the heavily fortified farmhouse -- and whose bravery was only surpassed by that of their opponents in the Second Light Battalion. Motivated by opposition to Napoleonic tyranny, dynastic loyalty to the King of England, German patriotism, regimental camaraderie, personal bonds of friendship, and professional ethos, the battalion suffered terrible casualties and fought tirelessly for many long hours, but refused to capitulate or retreat until the evening, by which time the Prussians had arrived on the battlefield in large numbers.

In reorienting Waterloo around the Hay Sainte farmhouse, Simms gives us a riveting new account of the famous battle -- an account that reveals, among other things, that Napoleon came much closer than is commonly thought to winning it. A heroic tale of 400 soldiers who changed the course of history, THE LONGEST AFTERNOON will become an instant classic of military history. Basic Books, Hardcover, 2015