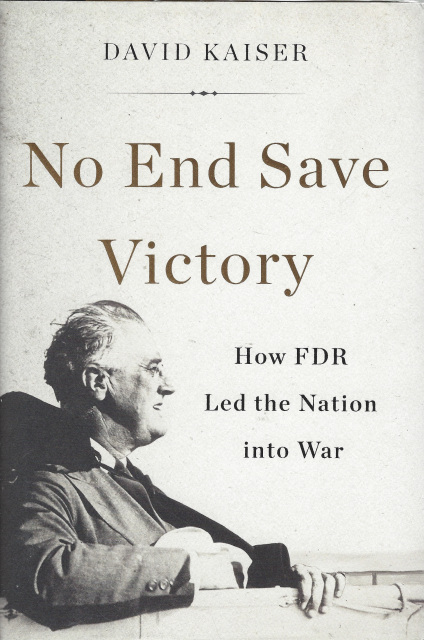 NO END SAVE VICTORY: HOW FDR LED THE NATION INTO WAR by David Kaiser

No End Save Victory: How FDR Led the Nation into War by David Kaiser

While Franklin Delano Roosevelt's first hundred days may be the most celebrated period of his presidency, the months before the attack on Pearl Harbor proved the most critical. Beginning as early as 1939 when Germany first attacked Poland, Roosevelt skillfully navigated a host of challenges -- a reluctant population, an unprepared military, and disagreements within his cabinet -- to prepare the country for its inevitable confrontation with the Axis.

In No End Save Victory, esteemed historian David Kaiser draws on extensive archival research to reveal the careful preparations that enabled the United States to win the Second World War. Alarmed by Germany and Japan's aggressive militarism, Roosevelt understood that the United States would almost certainly be drawn into the conflict raging in Europe and Asia. However, the American populace, still traumatized by memories of the First World War, was reluctant to intervene in European and Asian affairs. Even more serious was the deplorable state of the American military. In September of 1940, Roosevelt's military advisers told him that the United States would not have the arms, ammunition, or men necessary to undertake any major military operation overseas -- let alone win such a fight -- until April of 1942. Aided by his closest military and civilian collaborators, Roosevelt pushed a series of military expansions through Congress that nearly doubled the size of the U.S. Navy and Army, and increased production of the arms, tanks, bombers, and warships that would allow America to prevail in the coming fight.

Highlighting Roosevelt's deft management of the strong personalities within his cabinet and his able navigation of the shifting tides of war, No End Save Victory is the definitive account of America's preparations for and entry into World War II. As Kaiser shows, it was Roosevelt's masterful leadership and prescience that prepared the reluctant nation to fight -- and gave it the tools to win.