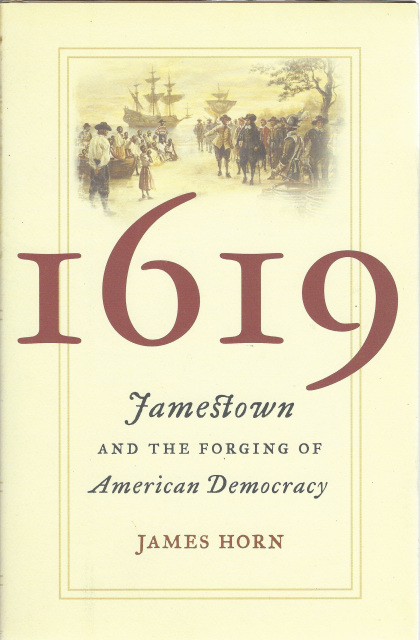 1619: JAMESTOWN AND THE FORGING OF AMERICAN DEMOCRACY by James Horn

1619: Jamestown and the Forging of American Democracy by James Horn

Along the banks of the James River, during an oppressively hot spell in the middle of summer 1619, two events occurred within a month of one another that would profoundly shape the course of history. At the end of July, the General Assembly -- the first representative governing body in America -- met in the newly built church at Jamestown. Several weeks later, two battered privateers entered the Chesapeake Bay carrying the first African slaves to arrive in mainland English America.

In 1619, historian James Horn sheds new light on the year that gave birth to the most important political development in American history, the rise of democracy, and the emergence of what would in time become on of the nation's greatest challenges: the corrosive legacy of slavery and racism that has afflicted America ever since.

Questioning many of the cherished myths of our founding, 1619 is essential reading for anyone who wishes to understand America's true beginnings.