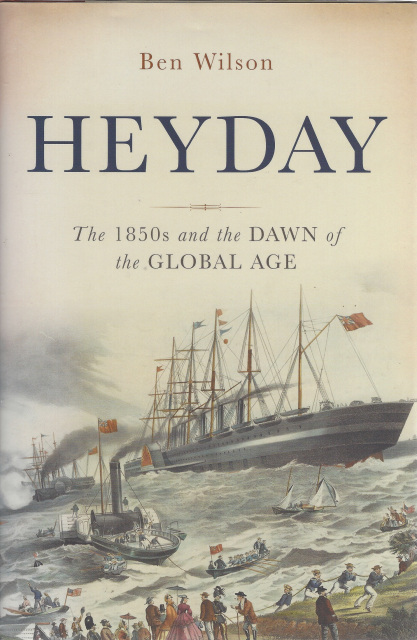 HEYDAY: THE 1850S AND THE DAWN OF THE GLOBAL AGE by Ben Wilson

Heyday: The 1850s and the Dawn of the Global Age by Ben Wilson

HEYDAY brings to life one of the most extraordinary periods in modern history. Over the course of the 1850s, the world was reshaped by technology, trade, mass migration, and war.

The global economy expanded fivefold, millions of families emigrated to the ends of the earth to carve out new lives, technology revolutionized how people communicated, and steamships and railways cut across vast oceans and continents, shrinking the world and creating the first global age. It was a decade of breathtaking and remorseless transformation, fueled by the promise of exponential progress.

In HEYDAY, acclaimed historian Ben Wilson recreates this time of explosive energy and dizzying change, a rollercoaster ride of booms and busts. The 1850s were witness to the laying of the first undersea cable in 1851, the rush for gold in California and Australia, and fleets of pirate vessels docked in Hong Kong harbor, eager to take advantage of booming trade. The West's insatiable hunger for land, natural resources, and new markets encouraged free trade, bold exploration, and colonization like never before.

Buoyed by supreme self-confidence -- as well as new technologies of war -- nations clashed across the globe, and indigenous peoples fell victim to the assurgent West. Reckless economic expansion led to lasting ecological damage and the demise of local cultures that could not keep pace with the blistering pace of capitalism and free trade. In HEYDAY, we encounter Muslim guerrilla fighters in the Caucasus Mountains and freelance empire-builders in the jungles of Nicaragua, British free trade zealots preying on China and samurai warriors resisting Western incursions in Japan.

A dazzling history of a tumultuous decade, HEYDAY traces the origins of our globalized world order.