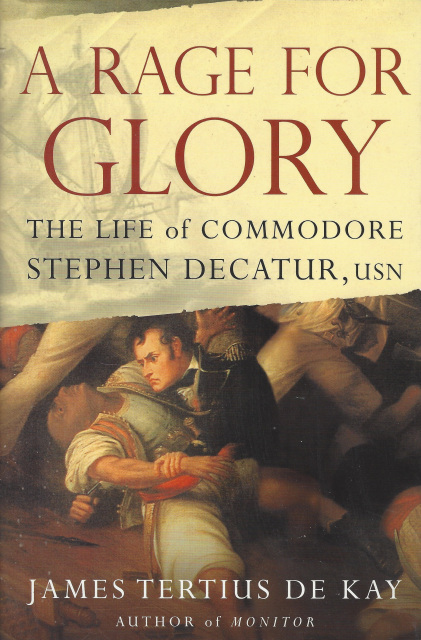 A RAGE FOR GLORY: THE LIFE OF COMMODORE STEPHEN DECATUR, USN by James Tertius de Kay

A Rage for Glory: The Life of Commodore Stephen Decatur, USN by James Tertius de Kay

Stephen Decatur was one of the most awe-inspiring officers of the entire Age of Fighting Sail. A real-life American naval hero in the early nineteenth century, he led an astonishing life, and his remarkable acts of courage in combat made him one of the most celebrated figures of his era.

Decatur's dazzling exploits in the Barbary Wars propelled him to national prominence at the age of twenty-five. His dramatic capture of HMS Macedonia in the War of 1812, and his subsequent naval and diplomatic triumphs in the Mediterranean secured his permanent place in the hearts of his countrymen. Handsome, dashing, and fearless, his crews worshipped him, presidents lionized him, and an adoring public heaped fresh honors on him with each new achievement.

James Tertius de Kay is one of our foremost naval historians and in A RAGE FOR GLORY, the first new biography of Decatur in almost seventy years, he recounts Decatur's life in vivid colors. Drawing on material unavailable to previous biographers, he traces the origins of Decatur's fierce patriotism ("My country...right or wrong!"), chronicles Decatur's passionate love affair with Susan Wheeler, and provides new details of Decatur's tragic death in a senseless duel of honor, secretly instigated by the backroom machinations of jealous fellow officers determined to ruin him. Decatur's death left official Washington in such shock that his funeral became a state occasion, attended by friends who included former President James Madison, current president James Monroe, Chief Justice John Marshall, and ten thousand more.

Decatur's short but crowded life was an astonishing epic of hubris, romance, and high achievement. Only a handful of Americans since his time have ever come close to matching his extraordinary glamour and brilliance.