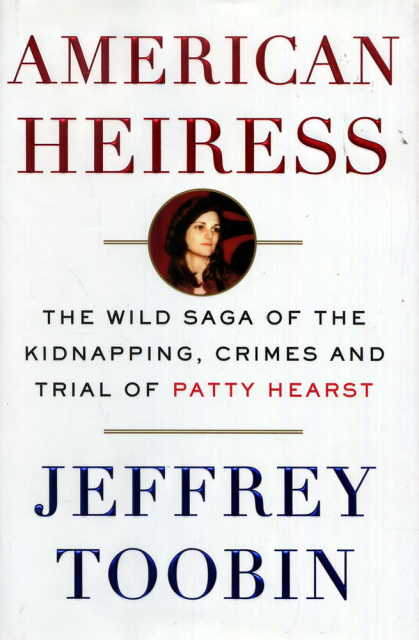 AMERICAN HEIRESS: THE WILD SAGA OF THE KIDNAPPING, CRIMES, AND TRIAL OF PATTY HEARST by Jeffrey Toobin

American Heiress: The Wild Saga of the Kidnapping, Crimes, and Trial of Patty Hearst by Jeffrey Toobin

On February 4, 1974, Patty Hearst, a sophomore in college and heiress to the Hearst family fortune, was kidnapped by a ragtag group of self-styled revolutionaries calling itself the Symbionese Liberation Army. The already sensational story took the first of many incredible twists on April 3, when the group released a tape of Patty saying she had joined the SLA and had adopted the nom de guerre "Tania."

The weird turns of the tale are truly astonishing -- the Hearst family trying to secure Patty's release by feeding all the people of Oakland and San Francisco for free; the bank security cameras capturing "Tania" wielding a machine gun during a robbery; a cast of characters including everyone from Bill Walton to the Black Panthers to Ronald Reagan to F. Lee Bailey; the largest police shoot-out in American history; the first breaking news event to be broadcast live on television stations across the country; Patty's year on the lam, running from authorities; and her circus-like trial, filled with theatrical courtroom confrontations and a dramatic last-minute reversal, after which the term "Stockholm syndrome" entered the lexicon.

The saga of Patty Hearst highlighted a decade in which America seemed to be suffering a collective nervous breakdown. Based on more than a hundred interviews and thousands of previously secret documents, AMERICAN HEIRESS thrillingly recounts the craziness of the times (there were an average of 1,500 terrorist bombings a year in the early 1970s). Toobin portrays the lunacy of the half-baked radicals of the SLA and the toxic mix of sex, politics, and violence that swept up Patty Hearst and re-creates her melodramatic trial. AMERICAN HEIRESS examines the life of a young woman who suffered an unimaginable trauma and then made the stunning decision to join her captors' crusade. Or did she?