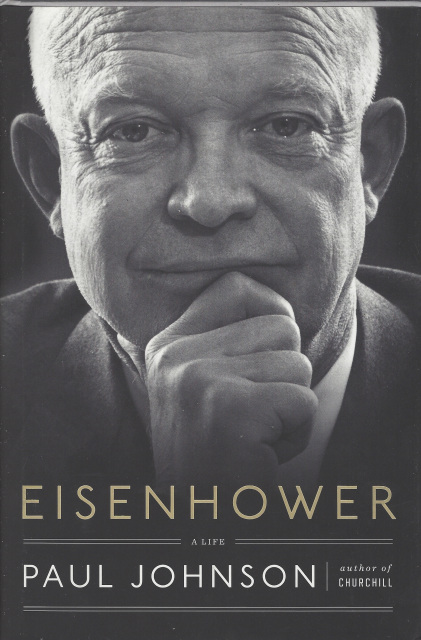 EISENHOWER: A LIFE by Paul Johnson

Eisenhower: A Life by Paul Johnson

When Dwight D. Eisenhower won the 1952 election with the largest number of votes in history, he became the president of the United States at the height of its postwar glory, when it was the most powerful country in the world. In this superb, succinct new biography, celebrated historian Paul Johnson illuminates the traits and talents that propelled Eisenhower's career as a five-star general and his two terms as president at the climax of the "American century."

Johnson traces the evolution of Eisenhower's understated poise, humor, and sense of command, looking to Ike's modest childhood in Kansas before exploring his years at West Point and his ascent through the military ranks. Johnson responds to the once-popular charges that Eisenhower was vague or removed as a leader, arguing that no one who examines Ike's military record can underestimate his intelligence, energy, or control. Deftly portraying Eisenhower's appointment as supreme commander of the Allied Forces in Europe during World War II, Johnson reveals Eisenhower's skill with military strategy during the deadliest conflict in history.

Ultimately, Johnson shows, Eisenhower was a masterful leader, both as a general and as president. With keen insight, Johnson explores the qualities that made Ike so successful: his indefatigable work ethic, his ability to get along with others, his PR savvy, his self-effacing presentation and, most of all, the boundless intelligence lying beneath his "Everyman" appearance. Johnson argues that these leadership qualities carried Eisenhower again and again through the hallmark events of the twentieth century: World War II, the cold war, the civil rights movement, and McCarthyism.

Many elements of Eisenhower's presidency speak to American politics today, including his ability to balance the budget, his skill in managing an oppositional Congress and his warnings about the military industrial complex. In EISENHOWER: A LIFE, Johnson has created an engaging portrait of an American president and a man once considered the "most well liked and popular American on earth.