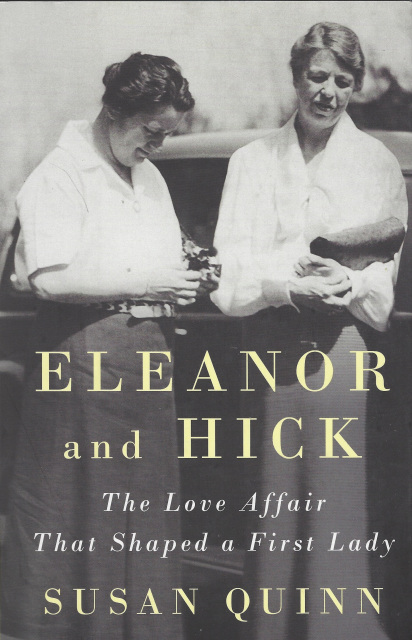 ELEANOR AND HICK: THE LOVE AFFAIR THAT SHAPED A FIRST LADY by Susan Quinn

Eleanor and Hick: The Love Affair That Shaped a First Lady by Susan Quinn

In 1933, as her husband assumed the presidency, Eleanor Roosevelt embarked on the claustrophobic, duty-bound existence of the First Lady with dread. By that time, she had put her deep disappointment in her marriage behind her and developed an independent life -- now threatened by the public role she would be forced to play. A lifeline came to her in the form of a feisty campaign reporter for the Associated Press: Lorena Hickok. Over the next thirty years, until Eleanor's death, the two women carried on an extraordinary relationship: They were, at different points, lovers, confidantes, professional advisers, and caring friends.

They couldn't have been more different. Eleanor had been raised in one of the nation's most powerful political families and was introduced to society as a debutante before marrying her distant cousin Franklin. Hick, as she was known, had grown up poor in rural South Dakota and worked as a servant girl after escaping an abusive home, eventually becoming one of the most respected reporters at the AP. Her admiration drew the buttoned-up Eleanor out of her shell, and the two fell in love. Eleanor confided in Hick about her marital unhappiness; Hick traded her career in journalism for work that brought her closer to the love of her life. For the next thirteen years, Hick had her own room at the White House, next to the First Lady's.

These fiercely compassionate women inspired each other to right the wrongs of the turbulent era in which they lived. During the Depression, Hick reported from the nation's poorest areas for the WPA, and Eleanor used these reports to lobby her husband for New Deal programs. Hick encouraged Eleanor to turn their frequent letters into her popular and long-lasting syndicated column, "My Day," and to befriend the female journalists who became her champions. When Eleanor's tenure as First Lady ended with FDR's death, Hick urged her to continue to use her popularity for important causes -- advice Eleanor took by leading the UN's postwar Human Rights Commission. At every turn, the bond between these two women was grounded in their determination to better their troubled world.

Deeply researched and told with great warmth, ELEANOR AND HICK is a vivid portrait of love and a revealing look at how an unlikely romance influenced some of the most consequential years in American history.