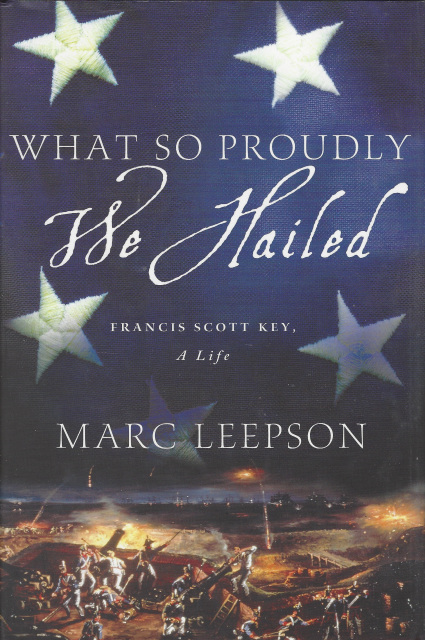 WHAT SO PROUDLY WE HAILED: FRANCIS SCOTT KEY, A LIFE by Marc Leepson

What So Proudly We Hailed: Francis Scott Key, A Life, by Marc Leepson

Francis Scott Key is enshrined in America's iconography as a paragon of patriotism on par with Betsy Ross, Patrick Henry, Paul Revere, and John Hancock -- individuals who hold exalted places in American history for performing one memorable act. For Francis Scott Key, it was writing "The Star-Spangled Banner" under the most dramatic (and unlikely) of circumstances: while watching the all-night Battle of Baltimore from the deck of a British warship in that city's harbor during the War of 1812.

In WHAT SO PROUDLY WE HAILED, historian Marc Leepson reveals Francis Scott Key as a man of his time. Full of contradictions, Key was a slave owner who fought slave trafficking and defended slaves in court for free. An influential confidant and adviser to Andrew Jackson and a close friend of John Randolph of Roanoke, Key's home in Georgetown was a frequent gathering place for intellectual heavyweights of the day. He was a leader of the American Colonization Society, a national movement that worked to send free blacks to Africa -- a movement that led to the creation of the West African nation of Liberia.

Set as the early republic was rapidly crowing and confronting portentous issues of states' rights and war and peace, this is the fascinating life story of an American patriot who played a little-known but important role in shaping the United States.