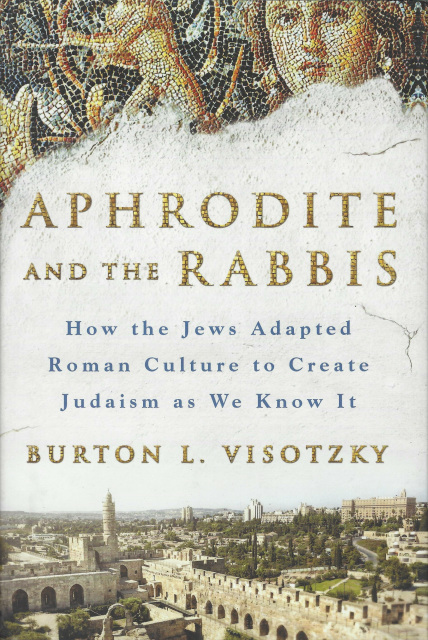 APHRODITE AND THE RABBIS: HOW THE JEWS ADAPTED ROMAN CULTURE TO CREATE JUDASIM AS WE KNOW IT by Burton L. Visotzky

Aphrodite and the Rabbis: How the Jews Adapted Roman Culture to Create Judaism as We Know It by Burton L. Visotzky

Judaism as we know it is a western Roman religion, argues Rabbi Burton Visotzky in this fascinating history. Yes, the very empire that destroyed the Jerusalem Temple in 70 CE served as the culture in which Judaism was nurtured and became the religion of the rabbis that we still celebrate today. Full of fascinating detail from the daily life and culture of Jewish communities across the Hellenistic world, APHRODITE AND THE RABBIS will appeal to anyone interested in the development of Judaism, religion, history, art, and architecture.

Among the many surprising facts that Rabbi Visotzky reveals: The Passover Seder is a Greco-Roman symposium banquet (minus the "dancing" girls at the end); Midrash, that seemingly unique form of rabbinic literature, draws heavily on Greco-Roman rhetorical techniques; the god Zeus-Helios is depicted in synagogue mosaic floors across ancient Israel; the rabbis' obsession with the Torah mirrors the Greek and Roman focus on Homer, even to numbering the books of the Bible (with some creative accounting) to match those of The Iliad and The Odyssey.