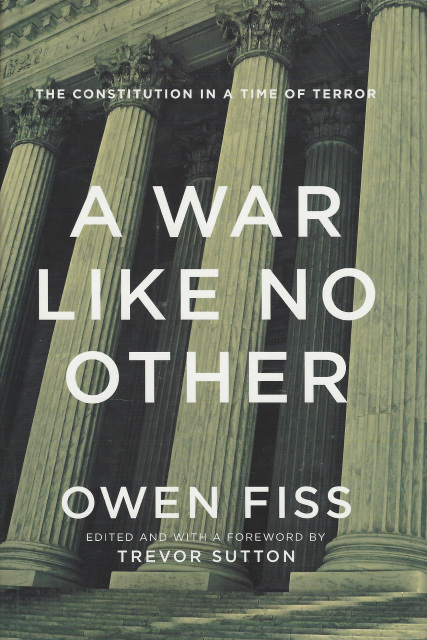 A WAR LIKE NO OTHER: THE CONSTITUTION IN A TIME OF TERROR by Owen Fiss

A War Like No Other: The Constitution in a Time of Terror by Owen Fiss

Owen Fiss has b een called "one of the truly magisterial figures in contemporary American legal academics" by Yale Law School dean Robert Post, yet before 2001 it would have seemed unlikely for Fiss to write about national security and the laws of war -- his focus was civil procedure, freedom of speech, and equal protection. But when the War on Terror began, Fiss realized that the constitutional principles that shield the individual from the awesome power of the state were dissolving, perhaps irreparably, and it was time for him to speak up.

The ten chapters in this volume cover the major legal challenges posed by the War on Terror, from Guantanamo to drones, with a focus on their constitutional dimensions. The underlying theme is Fiss's concern for the offense done to the U.S. Constitution by the administrative and political branches of government in the name of public safety, and the refusal of the judiciary to hold the government accountable. Fiss confronts the danger that many of the offenses will outlast the political climate that created them.

Although the legal dimensions of the War on Terror are often perceived as affecting only those accused or suspected of terrorist activities, in Fiss's view the character of American society itself is also at stake. When the Constitution is degraded in the name of national security, the rights of all those subject to the authority of the U.S. government are at risk.

A WAR LIKE NO OTHER offers an essential intellectual foundation for the rule of law in an age of fear, from one of the great legal minds of our time.