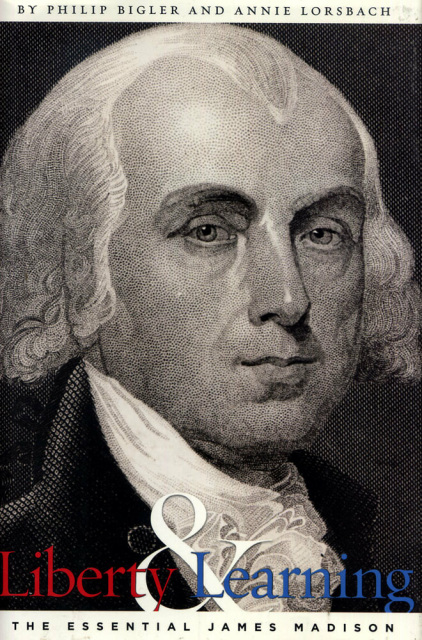 LIBERTY AND LEARNING: THE ESSENTIAL JAMES MADISON by Philip Bigler and Annie Lorsbach

Philip Bigler brings light to James Madison's intellectual contributions during the infancy of our nation in a way that is accessible to all readers and not reserved for scholars. Going issue by issue -- education, religious freedom, republicanism -- Bigler shows that Madison, from his time as a curious student to his years as president of the United States, displayed a genius that benefits our country to this day.

Levar Stoney, a leader of the Democratic Party of Virginia, finds it paradoxical that Madison would not likely have openly supported President Barack Obama, an African-American who now leads a party that traces its origins to the Democratic-Republican Party founded by Madison and Thomas Jefferson. Still, the very rights President Obama has embraced -- equality and freedom of opportunity -- were rights that Madison ultimately helped guarantee for all Americans through his authorship of the Constitution and the Bill of Rights. Although he may have had misgivings about the institution of slavery, his otherwise useful pragmatism clouded any sort of intervention that may have changed our nation's course early on. Bigler does not shrink from that assessment in this book.

Despite his shortcomings on the issue of slavery, Madison promoted the idea that an educated and virtuous body politic was necessary for a truly free society. This is an ideal that both current Republican and Democratic parties strive to protect in spite of the discourse we may experience today.

LIBERTY AND LEARNING captures the personal and human side of this founding father, whether good or bad, and has done a wonderful job in highlighting the unsung heroics of James Madison.