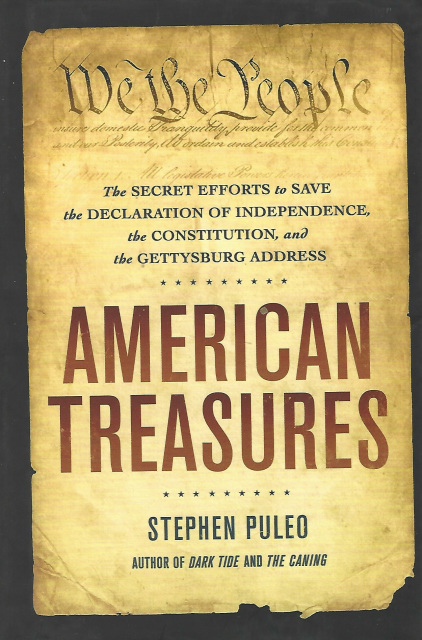 AMERICAN TREASURES: THE SECRET EFFORTS TO SAVE THE DECLARATION OF INDEPENDENCE, THE CONSTITUTION, AND THE GETTYSBURG ADDRESS by Stephen Puleo

American Treasures: The Secret Efforts to Save the Declaration of Independence, the Constitution, and the Gettysburg Address by Stephen Puleo

On December 26, 1941, Secret Service Agent Harry E. Neal stood on a platform at Washington's Union Station watching a train chug off into the dark and feeling at once relieved and inexorably anxious. These were dire times. Hitler's armies were plowing across Europe, seizing or destroying the Continent's historic artifacts at will, and three weeks earlier Japan unleashed its devastating attack on Pearl Harbor. American officials now feared an enemy attack on Washington, D.C.

So, President Franklin D. Roosevelt set about hiding the country's valuables. On the train speeding away from Neal sat four plain-wrapped cases containing the documentary history of America -- including the Declaration of Independence, the Constitution, and the Gettysburg Address -- guarded by a battery of agents and bound for safe-keeping in the nation's most impenetrable hiding place.

AMERICAN TREASURES charts the creation and little-known journeys of these priceless American documents. From the risky and audacious adoption of the Declaration of Independence in 1887 to our modern Fourth of July celebrations, AMERICAN TREASURE shows how the ideas captured in these documents underscore the nation's strengths and hopes, and embody its fundamental values of liberty an equality. Stephen Puleo weaves exciting stories of freedom under fire -- from the smuggling of the Declaration and Constitution out of Washington days before the British burned the capital in 1814, to their covert relocation during World War II -- crafting a sweeping history of a nation united to preserve its democracy and the values embodied in its founding documents.