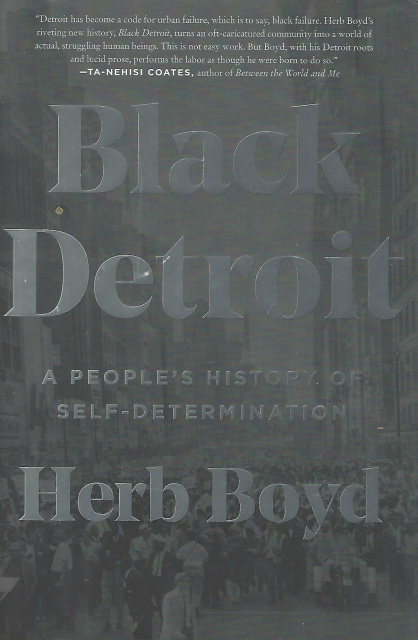 BLACK DETROIT: A PEOPLE'S HISTORY OF SELF-DETERMNATION by Herb Boyd

Black Detroit: A People's History of Self-Determination by Herb Boyd

Award-winning journalist Herb Boyd chronicles the fascinating history of Detroit through the lens of the African American experience. Offering an expansive discussion of this iconic city, BLACK DETROIT ranges in subject from Antoine de Lamothe Cadillac's initial vision of what would become a thriving metropolis to the city's glory days as the center of American commerce; from the waves of fugitives traveling on the Underground Railroad to the advent of the People Mover circling downtown; from the creation of the unparalleled sound of Motown to the emergence of Wayne State University as a hotbed of political thought.

Boyd combines deep passion and a stunning eye for detail to seamlessly blend personal experience, exhaustive research, and eyewitness accounts collected from some of the city's wisest griots. BLACK DETROIT looks at the influence African Americans have had on various aspects of the city's history, culture, and politics, including the auto industry -- both as the cornerstone of the union movement and the majority population on the fatory floor -- and it reframes the riots sparked by police brutality and housing discrimination from the perspective of the people most impacted by the city's neglectful policies. In the process, the book presents a roll all of the illustrious men and women who have defined and shaped the Motor City, including Malcolm X, Aretha Franklin, Berry Gordy, Fannie Richards, abolitionist William Lambert, and Coleman Young, Detroit's first black mayor.

This important book documents how a committed work ethic, a well-developed spirit of resistance, and a deep sense of heritage continue to run strong through Detroit's black community -- providing the true engine propelling the city's reemergence as a viable urban center for the twenty-first century.