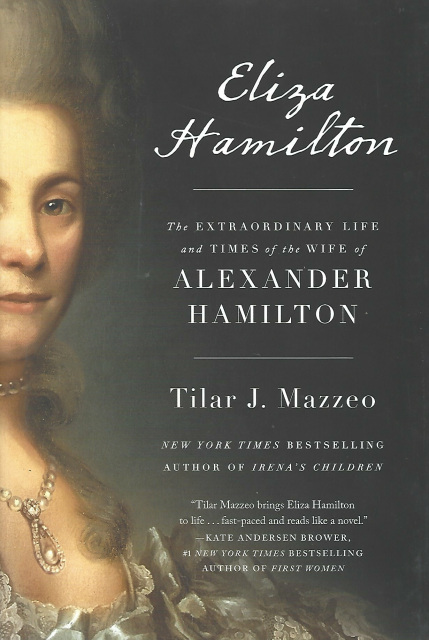 ELIZA HAMILTON: THE EXTRAORDINARY LIFE AND TIMES OF THE WIFE OF ALEXANDER HAMILTON by Tilar J. Mazzeo

Eliza Hamilton: The Extraordinary Life and Times of the Wife of Alexander Hamilton by Tilar J. Mazzeo

Fans fell in love with Elizabeth Schuyler Hamilton -- Alexander Hamilton's devoted wife -- in Lin-Manuel Miranda's musical phenomenon HAMILTON. In Alexander's last letter to Eliza before he died, he described her as the "best of wives, best of women." Yet Eliza remains a mystery, her story largely unknown to many.

In ELIZA HAMILTON: THE EXTRAORDINARY LIFE AND TIMES OF THE WIFE OF ALEXANDER HAMILTON, Tilar Mazzeo -- New York Times bestselling author of IRENA'S CHILDREN -- provides a riveting and fascinating account of this truly remarkable woman. Mazzeo follows Eliza through the many ups and downs of her very full life: from her early years as a hardy and fearless pioneer girl, to loyal wife and devoted mother, to her remarkable charity, to the aftermath of Alexander's tragic murder, and to preserving the legacy of the Hamilton name in her later years.

Based on shocking fresh research involving the infamous Reynolds scandal, firsthand excerpts from letters, and sweeping prose, ELIZA HAMILTON is a mesmerizing and affecting portrait of one of America's Founding Mothers. This formidable woman comes alive across the reach of history with feelings and passions as real as our own, making the historical record a reality. Get to know the exceptional woman behind the famous man.