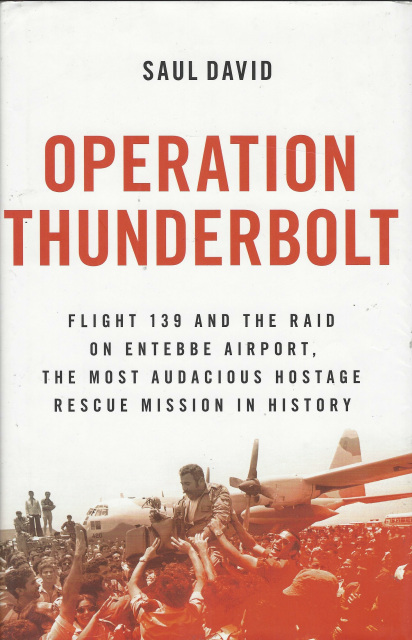 OPERATION THUNDERBOLT: FLIGHT 139 AND THE RAID ON ENTEBBE AIRPORT, THE MOST AUDACIOUS HOSTAGE RESCUE MISSION IN HISTORY by Saul David

Operation Thunderbolt: Flight 139 and the Raid on Entebbe Airport, the Most Audacious Hostage Rescue Mission in History by Saul David

On June 27, 1976, a group of Arab and German terrorists hijacked Air France flight 139 en route from Tel Aviv to Paris. The plane was diverted to Entebbe Airport in Uganda, where the terrorists demanded the release of fifty-three "freedom fighters' in Israeli, Kenyan, and European jails in return for the safe release of the 253 passengers and crew. Idi Amin, whose murderous rule of Uganda was then in its fifth year, made no attempt to intervene, because he was colluding with the terrorists.

After most of the non-Israeli hostages had been released, Israel faced an impossible choice: give in to terrorism or risk a rescue that had a high chance of failure. IN the wake of the massacre of eleven Israeli athletes at the Munich Olympics, this decision was almost incalculably difficult.

As Saul David recounts in this brilliantly researched and utterly convincing reconstruction of the planning and execution of one of the most complex Special Forces missions ever, Operation Thunderbolt required more than just tactical audacity. In a mere two days, three of the most important men in Israeli history -- Ehud Barak, Shimon Peres, and Yitzhak Rabin -- marshaled resources, secured necessary international partners, and masterminded the raid that would astonish the world.

OPERATION THUNDERBOLT gives us the first comprehensive account using classified documents from archives in four countries and interviews with key participants, including Israeli soldiers and politicians, hostages, and a former terrorist. The result is an engrossing and thrilling read that brings to life the role that ingenuity and bravery can play against even the most impossible odds and the most committed opponents.