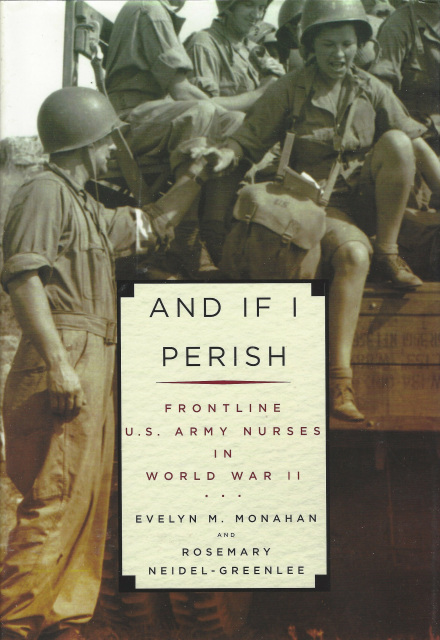 AND IF I PERISH: FRONTLINE U.S. ARMY NURSES IN WORLD WAR II by Evelyn M. Monahan and Rosemary Neidel-Greenlee

And If I Perish: Frontline U.S. Army Nurses in World War II by Evelyn M. Monahan and Rosemary Neidel-Greenlee

A galvanizing narrative of the wartime role played by U.S. Army nurses -- from the invasion of North Africa to the bloody Italian campaign to the decisive battles in France and the Rhineland.

More than 59,000 nurses volunteered to serve in the U.S. Army Nurse Corps alone: 217 lost their lives (16 by enemy action), and more than 1,600 were decorated for meritorious service and bravery under fire. But their stories have rarely been heard. Now, drawing on never-before-published eyewitness accounts -- many heroic, some mundane and comic -- Monahan and Neidel-Greenlee take us to the front lines to the withering fire on the beaches of Anzio and Normandy, and to the field and evacuation hospitals, as well as bombed and burned hospital ships. We witness the nurses -- and the doctors with whom they served -- coping with the physical and psychological damage done to the soldiers in combat. We see them working -- often with only meager supplies and overwhelmed by the sheer number of casualties -- to save the lives and limbs of thousands of wounded troops. With them we experience the almost constant packing up and moving on to keep up with advancing troops, foxholes dug under camp beds, endless mud, and treacherous minefields. The vividness and immediacy of their recollections provide us with a powerfully visceral, deeply affecting sense of their experiences -- terrifying and triumphant, exhausting and exhilarating.

A revelatory work that at last gives voice to the nurses who played such an essential role in World War II.