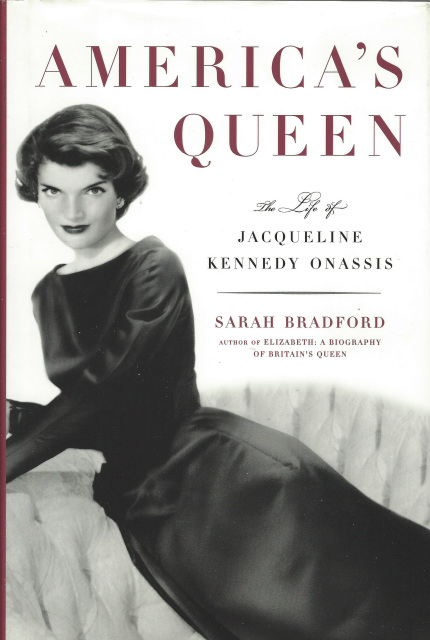 Jacqueline Kennedy Onassis has captivated the American public for more than five decades. From her introduction to the world as "debutante of the year" in 1947 to her death in 1994, she truly remained America's answer to royalty. In AMERICA'S QUEEN, the acclaimed biographer of Queen Elizabeth and Princess Grace presents the real Jackie in a sympathetic but frank portrait of an amazing woman who has dazzled us since her teenage years.

Sarah Bradford has written a timely celebration of a life that was more private than commonly supposed. The range of her interviews is extraordinary. We hear from people from every era of Jackie's life, including many who have never spoken in such depth on record before -- childhood intimates, Bouvier and Auchincloss relations, Kennedy family members and friends, Washington insiders, observers of the Onassis years, and admirers and colleagues from her professional life in New York. Using the insights gained from these remarkable reminiscences, Bradford is able to make a coherent picture out of the otherwise disparate and puzzling chapters of Jackie's life, from the aristocratic milieu of Newport and East Hampton to political Washington, the Greek isles, and New York's publishing community.

Jackie's privileged upbringing instilled rigid self-control while her expedient marriage into the overwhelming Kennedy clan consolidated her determination. Revealing new testimony from many of the couple's friends shows the profound complexities both of this apparently very public relationship and of her controversial marriage to Aristotle Onassis. Here is the private Jackie -- neglected wife, vigilant mother, and working widow.

Complete with rare and previously unseen photographs from the private collections of Jackie's friends and family, AMERICA'S QUEEN portrays the woman behind the public persona -- resourceful, controversial, loving, demanding, giving -- in the most complete, and completely convincing, life story yet written.