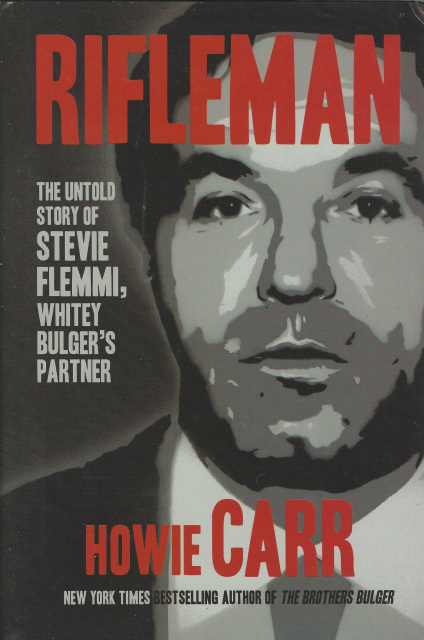 Stevie "The Rifleman" Flemmi was, for 40 years, one of the most-feared gangsters in Boston. For much of that time, he was the partner of Whitey Bulger, the 16-year, FBI Ten Most Wanted fugitive with a $2 million reward on his head who was captured in 2011.

Flemmi had been convicted of 10 murders and took the Fifth Amendment when asked about 10 others. His cohort, Bulger, was charged with 19 more. Their hitman, John Martorano, was convicted of 20 others. RIFLEMAN is the story of Flemmi's life of crime, as told to federal and state law enforcement after he pled guilty in 2003. The original document the book is based on is called a DEA 6, and it ran 146 single-spaced pages, covering dozens of extortions, assaults, and murders, including two of his girlfriends, one of whom was also his common-law stepdaughter.

The book spans the years from the days of dime bets and fedora-wearing gangsters to the modern world of high-flying drug smugglers who promised Flemmi and Bulger a million dollars each in "protection money" for every boatload of drugs they could bring into Boston Harbor. Along with Flemmi's statements, the text includes Carr's notations whenever Flemmi appears to be stretching the truth, which is often.

Supplementing the text are close to 300 photographs from Carr's own collection, a treasure trove of mugshots and noir-style pictures of slain gunmen, hoods being taken into court under guard, as well as never-before-seen wanted posters and FBI documents. This is truly a must-have for any True Crime fan, a combination of police procedural and a coffee table book of unforgettable photographs.